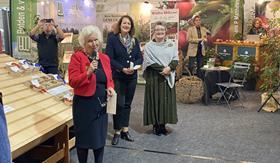 The government is “very keen to support the industry through these difficult times”, farming minister Victoria Prentis said in opening the 88thNational Fruit Show this week.

Prentis acknowledged that these are “very challenging times” and that some crop went unpicked due to a shortage of labour this season, but stressed that the seasonal workers pilot is aimed at helping and will be adjusted to meet growers' needs.

She did, however, underline the government’s view that the industry can do more to attract a domestic workforce, and said it wants to work with growers to help them address issues around labour recruitment in the same way it has done with the haulage sector.

Away from the labour issue, Prentis guaranteed funding for producer organisations through to the end of the current programmes and promised the pot of money for POs would remain at its current level beyond that.

She also said Defra will consult on the future of AHDB Horticulture later this year, and specifically on the levy rate for next season, but underlined secretary of state George Eustice’s promise to respect the result of the ballot. “But we won’t shut down activities that you need,” she added.

Industry 'at a tipping point'

Also speaking at the opening of the show, NFU vice president Tom Bradshaw offered his sympathies to growers over the challenging season they are having to deal with, describing the industry as “at a tipping point”.

The perfect storm of labour and driver shortages, the challenges of Covid, Brexit, supermarket price wars, and input cost increases are putting tremendous pressure on growers, he said, and costs must be passed up the supply chain to retailers, and ultimately inevitably to consumers.

Bradshaw railed again the government’s use of the term “unskilled” workers, arguing it was insulting and devalued their work, and said there was an urgent need for guarantees and an expansion of the seasonal workers pilot. “We need the government to give the industry confidence, also in terms of the regulatory framework,” he added.