Early Moroccan exports up 41 per cent 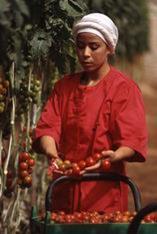 Exports of early fruits and vegetables from Morocco had reached 181,000 tonnes by December 16, a 41 per cent rise on the 128,000t exported to the same date last year, said the north African country’s ministry of agriculture.

However, the ministry expects a 13 per cent decrease in terms of the full crop year export figure, due mainly to a four per cent fall in citrus productionyear on year.