Election promises: What will they really deliver for food and farming? 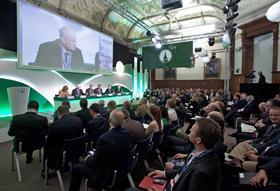 The politics debate at this year's OFC

As we near decision day at the polls around Britain, almost all of the election manifestos have proclaimed a promise to support the food and farming sector.

Labour has sworn to back apprenticeships in the rural economy and to drive British food exports, whilst the Conservatives have vowed a long-term plan to further develop food and farming, to cut red tape and promote British food globally.

The Liberal Democrats, Green Party and UKIP have also laid out their stalls with juicy pledges for a secure, sustainable and affordable food system. In addition, parties from the devolved regions will potentially play an important part in forming our next government, as well as in the policies influencing food and farming businesses.

But what do these promises really mean to farmers and growers who are concerned with matters like exchange rates, market prices and a diminishing number of agrochemicals?

To really help those producing Britain’s food, the government would be best placed to focus on further growing the British economy and spending time to strengthen the bonds with Brussels.

The lacklustre European economy is not being helped by the in-fighting between member states and Britain’s sabre-rattling about an ‘in/out’ referendum and restricting the movement of people. We must not forget that sterling’s relationship with euro and Europe’s citizens are fundamental foundations for our food industry.

While driving growth into new and existing export markets is vital, Westminster has the power to encourage more meaningful progress between suppliers and retailers, and food manufacturers, by developing shorter chains and longer-term supply contracts of at least five years. Politicians can influence change in these relationships, for example, by giving more clout to the Grocery Code Adjudicator and judicious changes to food labelling.

As our food sector represents the largest slice of Britain’s manufacturing output, perhaps the UK could follow the Irish lead in setting policy strategy with explicit growth and export targets by food type, and monitoring performance on a quarterly basis. A greater contribution to R&D would then be more easily justified and bring us closer to our competitors.

More clarity for the renewable sector would be valuable, with an outline for future dependence levels on fossil fuel, coupled with a vision for land use for food versus fuel, along with R&D investment into technologies such as electricity storage and transmission efficiency.

Finally, plant and animal protection products are increasingly under threat and having a government that understands the necessity of these products for our food security is crucial.

As the months unfold post-election, the manifestos pledging support for food and farming will certainly be in the spotlight; we are all, no doubt, waiting to see how it unfolds.