Ethiopia: One to watch 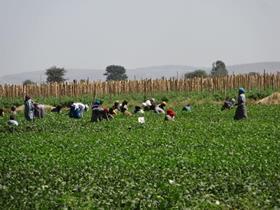 Ethiopa: Set for growth in agriculture

Ethiopia has often conjured up many negative images over the years. In a global agri-food sector that has been almost obsessed with developments in emerging markets, such as the so-called BRICs, Africa has gone almost unnoticed in comparison.

Yet some of the current developments are staggering. Not least in Ethiopia, probably most known in the agri-food sector for its production and exports of coffee and sesame, and in more recent years, the export of fresh vegetables and flowers.One only has to look, however, at the development of exports of fresh vegetables and flowers to see what might happen in the future.

Ethiopia is now the fourth-largest exporter in the world after Kenya, the Netherlands and India. The main export markets for Ethiopian fruit and vegetables are now the UK, Germany and Holland in the EU and Saudi Arabia in the Middle East. Flower exports are mainly targeted at Dutch auction houses.

Total fruit and vegetable production in the country is some four million tonnes per annum, with most of this based around smallholder production systems. But the export sector has seen the development of dedicated production units and modern packhouses standing comparison with any other businesses in Africa, if not the rest of the world. Flowers are often produced using modern polytunnel technology. International investment is the norm in the horticultural sector, through a combination of joint ventures and foreign direct investment. There is also a plethora of local investments in the sector.

Ethiopia has seen what some of its neighbours have achieved in the horticultural sector in the last 30 years or so, and seems determined to build on this and create its own thriving industry. How has this all been achieved? At one level, there has been a far more stable environment in the country over the last decade. This has provided the basic confidence for investors to bring a combination of skills, technology and finance to the country.

As with many other African countries, the economy has benefited from a period of rising commodity prices and the emergence of a middle class. Added to this, there is a favourable climate for fruit, vegetable and flower production, with a wide range of microclimates found around the country.

But this is not all. There are a variety of highly attractive government incentives to provide investors with opportunities to invest in land, build factories and packhouses, and import specialist agri inputs and equipment. Government plans to develop a number of food processing parks will be announced soon. There are relatively liberal incentives to allow the use of expatriate labour and allow for profitrepatriation.

Tax breaks for new businesses and low rates for land rental all add up to make Ethiopia an attractive location from which to grow and export high-value horticultural products. This is not to say it is all plain sailing. Ethiopia remains a challenging place to do business in, but the current situation is far removed from the one seen in the past.

There is a real buzz about the place and a sense of a country looking to make up for lost time in the past. A number of key agencies have been given the task of attracting inward investment, such as the Ethiopian Horticultural Development Agency (EHDA), the Ethiopian Agricultural Transformation Agency (an independent arm of the Ministry of Agriculture with access to hi-tech facilities for GPS mapping of irrigation, agri-chemical input usage and soil types) and the Ethiopian Investment Agency itself.

The EHDA has identified four “horticultural corridors” suitable for investment and providing ongoing assistance to potential investors. The local market is still at an early stage of development, but modern supermarkets and shopping malls are springing up in the capital city, Addis Ababa, fuelled by increasing incomes and rapid urbanisation. This will change over time, and the local market – not least the upmarket hotel and restaurant sector – will develop, but for the time being it will be the export business that drives the horticultural and floricultural sectors.

In contrast, the fruit processing sector in Ethiopia is still underdeveloped, with only one established fruit-processing business based in the Upper Awash Valley. This was built in the 1970s by the East German government and installed with Italian equipment, but in 2013 it was acquired by a major Middle Eastern-based investor. It supplies the domestic market only. There are no exports from Ethiopia at the moment.

New investments are likely in the future, but will need to procure suitable volumes for processing from what is a smallholder-based system of production. New farms, of some scale, seem the logical way forward to overcome this, and while there has been some backlash over the contentious issue of ‘land grabbing’ by foreign investors, these have been relatively isolated.

Government policy is clear on this point – inward investment in agriculture and horticulture is desirable, welcomed and needed if the country is to achieve its ambitious plans. These plans envisage Ethiopia moving towards being a ‘mid-income country’, based on World Bank definitions, by 2025.

And inward investment is already pouring into the country from a wide range of sources, including the EU, US, Saudi Arabia and China. This covers a huge range of activity, but the physical infrastructure of road and rail systems is a key priority area and is revolutionising the country.

Addis Ababa is going through a major makeover with new roads, a high-speed rail link, offices, hotels and housing developments across the city. In a country where some 80 per cent of the population work in the rural sector, agriculture, horticulture and food processing are all being targeted as major areas of investment.

Ethiopia enjoys excellent transport links to the Middle East – Jeddah is two days transit time for seafreighted products from neighbouring Djibouti, where most exports go from. Air connections to Europe are good and improving. There are some 150 flights per day with direct links to the EU, but also the Middle East, Asia and Latin America.

There is still much to do in terms of developing the high-value horticultural sector in Ethiopia, but the sheer pace of change taking place in the country is impressive. Not least from both the private and public sector, the intent and potential is there. Ethiopia is definitely one to watch.

John Giles is divisional director at Promar International. He has worked on a number of fruit and vegetable assignments in Africa, Asia, Latin America, the Middle East, the US and EU. He can be contacted at john.giles@genusplc.com.