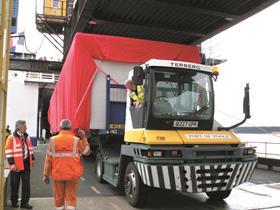 A growing number of haulage companies are shipping fresh produce using unaccompanied trailers because it is simpler and more cost-effective during the pandemic, Brittany Ferries has revealed.

Ferry companies have reported reduced freight volumes in January as a consequence of Brexit fears and stockpiling by companies. However, while volumes are low, Brittany Ferries says the proportion of unaccompanied units is already much higher than in previous years.

“Things like negative Covid tests for drivers are certainly helping drive the trend for unaccompanied loads,” said Brittany Ferries freight director Simon Wagstaff. “However, there are other financial benefits in going driverless.

“We know of one large haulage operation in Ireland, for example, that has organised reciprocal arrangements with another in Spain, dropping off and picking up trailers for each other. That’s a cost-effective way of doing business.”

The French shipping firm added that demand for its services are rising, predicting that more logistics firms will look to avoid congestion in Calais by crossing the Channel from Brittany in the coming months.

Galicia is Brittany Ferries’ newest Ro-Pax (roll-on/roll-off passenger) vessel, operating between Santander in Spain and Portsmouth. Since sailings began in early December 2020, around 40 per cent of Galicia’s freight has been unaccompanied trailers.

Further evidence comes from the workhorse of the Brittany Ferries fleet, Pelican. This freight-only ship has been operating since 2016, connecting Bilbao with Poole.

Brittany Ferries also reported that in Caen, which connects with Portsmouth and is the shipping company's busiest route for freight traffic, there has been a significant drop in the number of trucks being sent for phytosanitary checks.

In the first two weeks of January about 11 per cent of loads were being sent to the SIVEP (Service of Veterinary and Phytosanitary Inspections) for checks, but by the end of the month, this had dropped to around six per cent.

The reason, the company thinks, is that a lot of those loads were coming from Ireland, through the UK land bridge, and onto Caen, through Portsmouth.

That was in the first couple of weeks of the year. But now, they are being sent EU-EU (Ireland-France) through routes like Rosslare-Cherbourg because they aren’t subject to a SIVEP check on arrival in France. So that would account for the drop-off in SIVEP visits in Caen, Brittany Ferries believes.

Wagstaff added that he thinks Brittany ferries is well placed to navigate the changes brought about by the pandemic and Brexit. The flexibility of its fleet, “combined with our ability to accommodate unaccompanied loads throughout our extensive route network”, makes Brittany Ferries “an attractive prospect for the year ahead”, he said

“We are pleased too that freight is flowing well through our ports, without the queues that some forecast at the start of the year.”

Brittany Ferries opened a sea route connecting Ireland with Spain for the first time in 2018, predominantly for freight traffic.

More recently, the business has brought forward the opening of a Rosslare-Cherbourg connection, with Irish, French and Spanish hauliers seeking an alternative to the UK ‘land bridge’, with the cost, time and administrative burden this now brings.

Plans are in progress to open further freight routes, connecting Roscoff and St Malo in Brittany, with Ireland. The aim is to finalise schedules as soon as possible and to start operations in early February using Ro-Pax vessel Armorique.

In a normal non-Covid year Brittany Ferries carries around 210,000 freight units. Its 12 ships serve Caen, Cherbourg, Le Havre, Saint-Malo and Roscoff in France; Portsmouth, Poole and Plymouth in the UK; Santander and Bilbao in Spain; and Cork and Rosslare in Ireland.