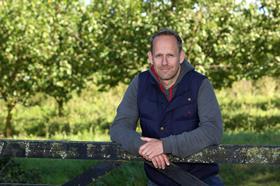 An Essex grower has launched a new fruit and vegetable box delivery service after losing his restaurant sector business during the Covid-19 outbreak.

Pete Thompson, whose family farm grows produce for the Chinese restaurant market in the UK, as well as apples, pears and plums, found his business facing a sudden loss of turnover as the restaurants he supplied were forced to close.

In response Holt Farm built an online shop and is offering home delivery to the Colchester area, with plans to expand to other parts of Essex and Suffolk. The objective is to ensure people have access to fresh produce without needing to leave their homes, as well as to keep staff employed.

The new online service is offering a choice of five boxes - Large, Small, English-grown, Gourmet and Just Fruit. Contents will change weekly with the seasons and include as much local produce as possible including rhubarb, spring greens and salad onions from Holt Farm. Shoppers can also purchase Thompson’s award-winning apple juice, Cotchel and Reliquum London Dry Gin, fruit spirits and Apple Brandy.

Over the coming months the boxes will feature premium items such as heritage tomatoes, which were being grown for Michelin-starred chefs, salad leaves like sorrel and lovage, fresh chick peas and fruit including figs, plums and apricots and several unusual citruses including Meyer lemons, calamondin and finger limes.

Thompson has also been working with other growers like Fairfield Farm potatoes and local strawberry producers, and has teamed up with food businesses including Essex pork farm Wicks Manor Pork, Hillfarm Oils, Crude Coffee and will soon add local artisan bread, milk and eggs.

“It’s been an incredibly fast learning curve since we launched this business a few weeks ago and incredibly rewarding dealing directly with customers - a refreshing change from working with big business,' he said. 'This is a long-term plan for us, to help people during the current crisis, but we hope it just marks the start of selling produce direct to local people.”