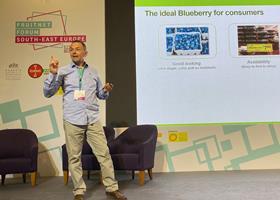 Blueberries face a difficult supply-demand balance in Europe, with huge potential to grow consumption further but genuine concerns that the rapid expansion of plantings could lead prices to collapse.

EU consumption has already risen 23 per cent since 2016, and if growth continues at the same rate some 650,000 tonnes of fruit would be needed to satisfy European demand within five to seven years, Liekens said. Global consumption is projected to hit two million tonnes in the same timeframe.

To underline the opportunity further, Liekens said that currently only 190g per person of blueberries are consumed in the EU per year, which compares unfavourably to the 1.4kg wolfed down by Americans. Estimates suggest that the EU figure could, however, hit 860g per person by 2026.

And that rise led Liekens to warn that production must stay in line with consumer demand. “There are too many blueberries being grown currently and everyone is nervous,” he told the audience in Belgrade. “Morocco will fill the shoulders and early season and Spain will suffer as the volumes are too high. In the coming months you may read about there being too many blueberries, but there are also still a lot of gaps to fill.”

For Balkan producers, Liekens’ advice was to diversify their varietal portfolio and not just rely on Duke. “Be careful or you will kill your own business model,” he warned. “It’s very important to know who your customer is, and to understand what is the best variety for you.”

Speaking more generally, Liekens said there is no “ideal” blueberry variety, but stressed that all consumer surveys highlighted that taste was the number-one priority for consumers.