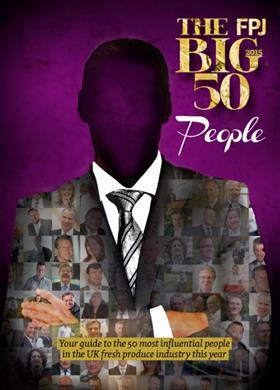 The FPJ Big 50 People has listed the 50 most influential people in the fresh produce business according to their activities and actions over the past 12 months.

The list, which is not ranked, has been compiled by selecting 10 subcategories from the sector, and shortlisting the most newsworthy, or influential, people within those categories. The shortlist was created by the FPJ editorial team, along with support and advice from industry insiders.

Primarily focused on those active within the UK market in categories ranging from suppliers to policymakers, the 'international' section highlighted influential figures across the global fresh produce business.

'In putting the list together, we decided it would be unfair and, more importantly, irrelevant to pit wholesalers against growers, politicians against supermarkets, suppliers against industry bodies. That is why the FPJ Big 50 People is not ranked,' said FPJ Big 50 People editor, Nina Pullman.

'Instead, we selected 10 categories from the sector and shortlisted the key people within their specialities, before choosing those who have been the most newsworthy, and had the most impact on their business or the wider sector, during the last year.

'The result is nonetheless a fantastic record of who is driving the industry forward across the full range of subcategories and related sectors. Inside you will find leaders of countries alongside English top-fruit growers, influential chefs alongside foodservice’s finest, and successful retail suppliers next to forward-thinking wholesalers.'