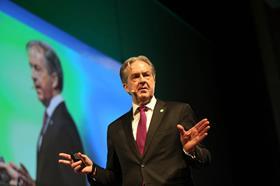 A new report launched by the Irish food board (Bord Bia) has set out the Irish food and farming industry’s ambition to be a world-leader in sustainable food and drink production.

The report, launched on the opening day of Bord Bia’s Global Sustainability Forum in Dublin, Ireland, offers a comprehensive summary of the first three years of the Irish Food Board’s Origin Green programme.

Launched in June 2012, Origin Green is believed to be the world’s first sustainability programme for a country’s entire food and drink sector.

As part of the programme, food and drink manufacturers have commited to over 800 sustainability targets around raw material sourcing, manufacturing processes and social sustainability.

The targets provide for reductions of €12 million and €17m of energy and water usage respectively by 2017, and seeks to reduce general waste generation by 14,000 tonnes.

According to Bord Bia, Origin Green has met with universal acclaim from the World Bank, the World Wildlife Fund, and from global leaders in the food and drink industry.

Irish Food Board chief executive, Aidan Cotter, said: “No other country anywhere is carbon foot-printing its farms on, what is, in effect, a national scale. Greater levels of demand from a growing population represent a significant opportunity for Irish food and drink producers.

'However, we must remain cognisant of our responsibility to expand in a manner which will not lead to the long-term degradation of our natural resources.”

A unique feature of Origin Green is the practice that all participating farms be audited and carbon-footprinted once every 18 months. Since its launch, almost 90,000 carbon assessments have been carried out on Irish farms.

Under Origin Green, food and drink companies are required to create three- to five-year sustainability development plans in which targets are set in areas such as raw material sourcing, energy usage and emissions, water and waste management and social sustainability such as producing healthier foods and investing in their communities.

Bord Bia's focus will now turn to how Origin Green can help lower the industry’s environmental footprint, with a major focus on emissions, biodiversity and water quality, while enhancing its impact on society by prioritising health and wellbeing.

Bord Bia also plans to extend the programme to retail and foodservice to complete the food supply chain, and ultimately reach out to consumers.