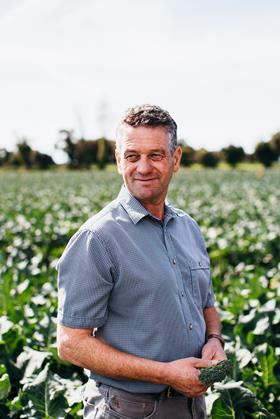 Ask Richard Le Cornu why he grows Tenderstem and the answer is quite simple – he’d probably no longer be farming if he didn’t.

The island-born producer, who grows roughly 140 tonnes of the crop for Barfoots each season, says he is “100 per cent sure” he would have gone out of business ten years ago if it wasn’t for Tenderstem and its booming popularity. Sales of the product have doubled to over 29.5 million tonnes in the past five years, according to Kantar, and the Tenderstem brand is now one of the five biggest in UK fresh produce.

“With the exception of Jersey Royals, Jersey’s fresh produce industry has dwindled over the years,” Le Cornu says. “We used to have a cauliflower industry, a flower industry, an indoor tomato industry, but all of that has just about disappeared now. And it comes down to economics at the end of the day.”

Downward price pressure from the UK’s major retailers, to which Jersey exports the lion’s share of its fresh produce, has squeezed growers’ margins just as much on the Channel Island as it has on the British mainland. In order to survive, farmers have had to either specialise in a high-value crop or grow at scale. “It’s one or the other,” says Le Cornu, whose relatively small 60-acre operation falls into the first bracket. “I’m just lucky I found Tenderstem.”

The latest in a string of Le Cornus to farm the island’s fields, Richard took over from his father in 1991, when he mainly grew cut flowers and Jersey Royals, before gradually switching his focus to Tenderstem. “I found it by luck over 20 years ago when my neighbour Bill Davis asked me to help run a trial [for Mack Multiples on behalf of M&S],” he recalls. “I was very busy and I had no idea what Tenderstem was but, as a favour, I grew it for him and the crop was hugely successful – it grew well, it sold well and since then it has increased and increased.”

Besides the Chinese kale-broccoli hybrid, which Le Cornu harvests from late May to late November, he also produces early Jersey Royals (grown under glass), chillis and purple sprouting broccoli, which he grows through the winter. While these other crops bring him year-round business, they are only a sideline – Tenderstem accounts for roughly 90 per cent of his work.

“I used to grow purple sprouting 12 months of the year, but I’ve cut down hugely because the popularity of Tenderstem has completely outweighed it,” he explains, adding that the latter is much more reliable than purple sprouting broccoli, which can develop a woody texture and prove difficult to sell.

This consistency in harvest quality does not detract from the meticulous work required in the Tenderstem picking process, however. The brand’s master licensor Coregeo demands strict specifications, with each stem having to measure around 20cm in length and no more than 1.5cm in diameter. Each individual stem is cut by hand and measurements are made by eye, meaning training is required to get pickers up to scratch.

Along with the fact that it is a branded product, this skilled and laborious process is a major reason for Tenderstem’s price premium. Non-organic Tenderstem sells for between £5 and £9 per kg at the big four supermarkets, whereas traditional broccoli only costs around £1.40 per kg. While such prices help ensure slightly wider margins for growers, the labour-intensive harvest also presents challenges – especially where Brexit is concerned.

“The labour situation is quite concerning,” says Le Cornu, who hires ten picking staff and a part-time driver – all of whom are either Polish or Portuguese (Madeiran). “Most of my staff have been with me quite long term, but with the rate of exchange as it is I will be struggling next year with my staff.”

Like other Jersey growers, Le Cornu sources labour through the Jersey Farmers’ Union, which has recently made trips to Poland to assess the chances of attracting enough workers to the island for next season. “The results aren’t particularly good at the moment,” he says. And as demand for the product gathers pace – year-on-year sales growth has exceeded 20 per cent in the last two years – he could be right when he says: “I think we need to start looking elsewhere to source our staff.”

A driving force behind this recent acceleration in sales is the trend for flexitarianism, according to Kate Gray, director of Tenderstem’s PR agency MCG. “It’s now much more prevalent in the major mults,” she says, “and a lot of the feedback we’re getting is that growth has been helped by people like Joe Wicks,” who featured the vegetable prominently in several recipes in his Lean in 15 cookbook.

Looking to benefit from this trend for making vegetables, rather than meat, the main event of a meal, MCG has been trying to promote the versatility of the product. “A lot of the work that we’re doing is about showing all the other ways to prepare it,” says Gray, whose PR agency showcased raw and ‘dehydrated’ Tenderstem canapés at a ‘Tenderstem picnic’ at Le Cornu’s farm.

It will be marketing drives like this – to encourage creativity in the way the product is prepared – that will help move the Tenderstem brand to the next stage in its development. But as post-Brexit labour sourcing continues to cause headaches for Le Cornu and other growers, Brexit could halt expansion – at least for the time being.

Pests and heavy rain have presented growing challenges this season. Rainfall in August was double the monthly average and downpours in September have put the roots of the crop under strain, Le Cornu reports. Club root has been his main obstacle pest-wise, reducing plant size and yield, but diamondback moth has not been a major problem as it was last year. “They devastated our crops and we lost time and harvest,” Le Cornu recalls.

Tenderstem was developed as a side project by a plant breeder named Mr Yagoshi at the Japanese seed company Sakata. Yagoshi had a keen interest in brassicas and over the course of ten years he used his spare time at work to develop the new variety, unaware it would become one of the biggest brands in British fresh produce. Following success in initial trials, the inventor went on to lead a team of breeders that developed new strains of the seed, eventually settling on the precise variety used by Tenderstem growers today.