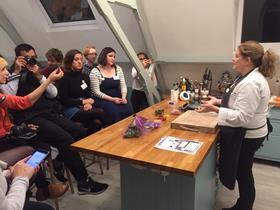 Branded kale-sprout hybrid Kalettes is poised for strong growth across the UK and Europe as an expanded marketing campaign targets bloggers, influencers and consumer media.

Now stocked in all major UK supermarkets, Kalettes are supplied via a number of licensed growers including Drysdales, Staples and Kettle Produce in the UK, and Van Oers in the Netherlands.

A blogger event held in London yesterday (16 November) marked the beginning of the biggest-ever marketing campaign for Kalettes. A similar event will take place in Berlin later this year, while press packs, a consumer giveaway and social media will promote the campaign message of versatility, and a product for ‘fun, healthy and everyday use’.

Tozer Seeds UK sales director, David Rogers, said the company is aiming to replicate the success of fellow branded brassica Tenderstem, although it has not adopted the ‘royalty’ system to fund marketing. Instead, revenue from seed sales is diverted into the marketing budget, and growers are licensed individually rather than in regional blocks.

Tozer has been working with Spanish PR agency Mint for two years, but this is the first season where the campaign has stepped up to another level, with a larger budget and larger supply of product. Kalettes were previously marketed as Flower Sprouts in the UK, before the name change was made to create a unified global brand.

“I see no reason why Kalettes couldn’t be the next Tenderstem. It is more versatile as a product, and both sprouts and kale are already trendy in the States,” said Rogers. Kalettes also has strong potential in Europe, he said, with licensed growers and strong sales growth in Germany, the Netherlands, Switzerland and Scandinavia.

Managing director of UK grower and Tesco supplier Drysdales, Chris Keenan, said he is “quietly confident” about the potential for Kalettes. “I think it could be a winner,” he said. “It’s a great product, very versatile, and has the health connotations. Tesco decided to stock it this year after a few years of trials so we have put in 30 acres to support that programme.

“We want a quiet start to establish it on the shelf first for this season, and ensure everything runs smoothly. Then it will be up to the independent grower to work with their customer base and ensure retailers push it. Gaining public awareness is the biggest challenge, and it will depend on how much the retailers want to get behind it.”

In Europe, Kalettes are now stocked in Albert Heijn in the Netherlands and in Edeka in Germany, said Rogers, with “massive potential” predicted for the Scandinavian markets. “Switzerland is also seeing strong sales. There is one grower there who has just spent around £15,000 on TV advertising – that’s how strong the demand is,” he said.

Globally, production in Australia and exports from the Netherlands are supplying a surprisingly buoyant market in South Korea. “We’ve had countless enquiries from South Korea for seed. There is really big interest there,” said Rogers.

“In Europe, Kalettes need to be grown by sprout growers and they are mostly in Holland,” he added.