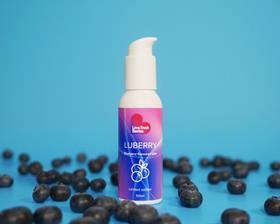 The Love Fresh Berries campaign has launched a limited-edition blueberry-flavoured lube to raise awareness of the relationship between the fruit and its sexual wellness benefits.

The lube - dubbed 'Luberry' - is being offered for free via the Love Fresh Berries Instagram channel.

The promotion comes as new research from Love Fresh Berries – British Summer Fruits’ year-round campaign promoting berries – found that Brits are ditching their ‘prudish and stuffy’ mentality and are increasingly happy to discuss sexual wellness with their colleagues, and even their parents.

The research found that over a quarter of adults enjoy talking freely about all intimate things and feel the days of keeping them a secret are over.

It also emerged that over half believe it is important to openly discuss sex, with 41 per cent having become more open to talking about sex in the last decade. Although on average, it’s not until you reach the age of 33 that you become confident talking all things sex.

The research aimed to unearth the changing attitudes towards sexual wellness and shine a light on the lesser-known benefits foods, like blueberries, may have on it.

Link between food and sexual wellness

Men are almost three times more likely to try certain foods to improve their sexual wellness than women. Despite this, the overall proportion of adults trying foods to improve it remains low at just 12 per cent, with only one in six aware that blueberries can have a positive effect.

The research also found that six in 10 Brits reckon more open discussion on sexual wellness can only be a good thing. Over half agreed it could give people the confidence to tackle sexual wellness issues, reduce taboos around sexually transmitted infections and help people improve safer sexual practice.

The Love Fresh Berries survey went on to find a quarter of Brits talk to other people about their sexual wellness on a weekly basis, with men almost twice as likely to discuss the topic than women within this period.

A further 43 per cent of Brits are happy to explore the topic with friends – with one in six even speaking about it with colleagues.

Almost half believe that talking so freely about the topic would create a more positive and open society – with one in two women feeling this compared to around one in three men. Some 55 per cent of Brits say that they felt liberated to be able to talk freely about what goes on in the bedroom.

Jo Hemmings, a behavioural psychologist who supports the Love Fresh Berries campaign, said: “It’s encouraging to see research that shines a light on Brits’ shifting attitudes toward these topics – and the creation of ‘Luberry’ is a fun way to get Brits thinking about the relationship between food and their sexual wellness.

“Further research is needed, but blueberries contain antioxidants which may help to reduce oxidative stress, thought to be a risk factor for male infertility. While their high concentration of flavonoids may benefit anxiety and quality of life for mothers in the postnatal period as well as helping reduce the risk of erectile disfunction in men.

“By normalising the discussion around sex, we can help lift the taboo on important sexual wellness issues that many suffer with in silence when they shouldn’t have to.”

Nutritionist Dr Emma Derbyshire, adviser to Love Fresh Berries, added: “Blueberries are a great convenient, refreshing snack that are easy for couples to nibble on throughout the day and there is some evidence that they could aid dopamine release in the brain which may boost libido. What’s more blueberries contain resveratrol – a naturally occurring antioxidant – which could have potential therapeutic effects for men with unexplained fertility, with ongoing research needed.”