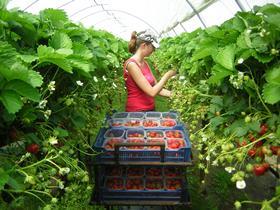 The MAC’s recommendations, released this week, suggested the government lower the minimum salary threshold from £30,000, to £25,600 for migrant work visas after Brexit.

It also suggested reviewing the Shortage Occupation List (SOL) for sectors of the economy suffering from chronic understaffing, as well as rejecting proposals for regional-based income threshold for immigrants.

Jan-Willem Naerebout, whose company Agri-HR recruits seasonal workers for the fresh produce industry, says the latest recommendations won’t change anything for growers facing difficulties in finding labour to work on their operations, however.

“Personally I don’t think it has any relevance to seasonal workers,” Naerebout says. “If an agricultural worker is on £10 per hour, and they do 48 hours per week for the whole year, even then they fall below the £25,600 threshold by a thousand.

“That lower threshold recognition is good for other sectors, but it doesn’t really touch people in agriculture.”

Despite fears over the impact of Brexit on labour shortages, Naerebout says 2020 could be a more positive one for recruiters, as the passing of the Withdrawal Agreement provided a certainty sorely lacking in recent years.

“This year has been positive in the sense that the UK is leaving the EU in an orderly fashion. It’s actually quite nice as the news won’t be picking up some of the negativity and scaremongering stories that we’ve seen on this.”

Naerebout says the UK is now looking a more attractive prospect for seasonal workers to come this year. “Living wages have gone up by six per cent, but also the orderly departure from EU has made the exchange rate better, by about six per cent, so overall it’s a 12 per cent pay rise.”

With the Withdrawal Agreement to cease at the end of 2020 however, the future relationship between the UK and Europe remains unclear, with the government aiming to secure a new trade deal with the EU.

Naerebout says the current Right to Remain policy means any seasonal workers who have worked in the UK this year, are eligible to return to work in the UK for the next three years, meaning labour does not face its own “cliff-edge” scenario at the end of 2020.

“Someone only needs to work for one day between now and December 31 2020 for them to be able to continue working here for the next three years,” he adds. “The big question is what will the government do in terms of a SAWS immigration scheme.”

The government committed to expanding the current SAWS pilot scheme from 2,500 to 10,000 workers in its latest manifesto.

Naerebout says he hasn’t seen much evidence yet of that policy being readied however, agreeing that it was essential the government ultimately raise the numbers on the SAWS scheme to the 60,000-70,000 figure the NFU are calling for.