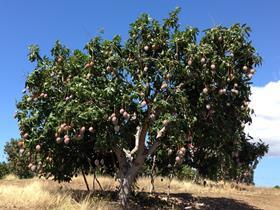 Mango production in the Dominican Republic

Reflecting the category’s well-established move into the mainstream, mango consumers are now becoming more aware about the differences in quality between varieties.

Added to this is the growth in the ready-to-eat mango market, meaning suppliers have the double dilemma of finding varieties with an appealing flavour and texture, with a predictable shelf life that travels well.

“We have found over the last few years that customers are becoming more aware of the different quality on offer within the mango market, and are prepared to pay a premium for a better-quality product,” says sales and marketing manager of exotics importer Jacana Produce, Mark Stuart. “Cheap varieties such as Tommy Atkins, which is a fibrous variety and mainly imported by sea, is being dropped in favour of better non-fibrous varieties that are tree ripened, ready to eat and shipped by air.”

Stuart says Jacana is not involved in large-scale mango importing, but nevertheless the company has seen “good growth” in the ready-to-eat market over the last year and he expects this to continue in the future.

Importer and grower Pacific Produce has two mango operations – in Peru, the company is one of the largest mango exporters, with yearly volumes over 300 containers, while its Dominican Republic operation produces smaller volumes of five or six containers per week, but has more growth potential.

Managing director Rob Cullum believes there is work to be done to educate consumers about the properties of new mango varieties. “Introduction of high-flavour varieties that have shorter shelf lives can be difficult due to the lack of product knowledge – some mangoes are amazing to eat at a ripened stage, which can make them not so attractive to look at. This will need clear customer labelling and information in order to get greater market penetration, especially as these varieties are often more expensive, though they are well worth it.

“At Pacific we are playing our part with the Ataulfo variety from Peru, which we have been shipping for four years now, experimenting with packaging and taking risks with containerised shipments, as we learn the boundaries of what can be achieved using seafreight instead of air.”

The 2015 Peruvian season has been an unusually difficult one, according to Cullum, who blames high prices paid by the US at the start of the season for raising grower expectations and putting pressure on the market. “The US paid very high prices at the start of the season and this just added fuel to the expectation levels,” he explains. “This encourages traders to run to farms that do not normally export, and this is where trouble starts as lower-quality fruit enters the market and naturally importers are not happy to pay high levels for lower quality – the market becomes confused and importers who paid fixed prices to traders get burned with low quality, and then good growers suffer because the market goes down.”

In addition, less rain in West Africa led to longer shipping windows for the region, which Cullum says added “a bit more volume to the pot”. “Lots of countries of origin also does not make predictions easy – Ivory Coast, Costa Rica, Puerto Rico, Dominican Republic, Mali, Ghana, Brazil and Senegal can all have overlapping weeks of supply.”

The Dominican Republic season is expected to run longer than normal this year – Pacific Produce imports Keitt mangoes from the region – although the market is facing competition from strong promotions on British berries and other summer fruit.

Elsewhere, Israeli exporter Galilee exported 25 per cent of its mangoes to the UK last year, and estimates it will send similar volumes for the 2015 season.

Sales manager Nir Harel says that, after two heatwaves during last month, and extreme cold temperatures in January, Israeli mangoes will be down about 20 per cent. But he adds: “As far as Galilee’s quantities are concerned, as more growers joined our network this season, and we have a new packhouse, we should export about 50 per cent more than last season.”

Nir says Galilee’s export season should start in about three weeks with the Shelly variety.