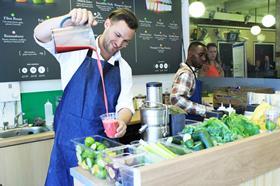 Juice brand Supernatural is expanding in London with the opening of two new premises at tourist destinations.

The two new juice bars, at Brick Lane and Notting Hill, take its portfolio up to five. It already had outlets in Underground stations at Canary Wharf, Oxford Circus and Piccadilly Circus.

The Brick Lane site is set to become Supernatural’s flagship store, according to the company, which originally launched as a stall in Maltby Street Market in 2012.

In further news, Supernatural has agreed a tie up with fitness brand 1Rebel, which will see post-workout juices and alcoholic drinks served from concessions within 1Rebel’s two London studios.

Supernatural uses locally sourced fresh fruit and vegetables, as well as an international list of specialist produce. Its staff are ex-bartenders and mixologists, looking to tap into the current crazy for healthy drinking.

Founder Dan Thomson said: “We’re thrilled to be expanding our brand to new areas of London and opening up our superfast, super fresh offerings to new audiences. Supernatural is a brand built on the belief that healthy food and drinks can be nutritional, delicious and affordable.”