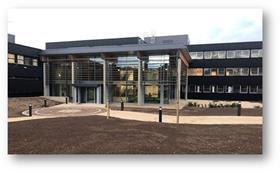 The campus is on NIAB’s original Old Granary and John Bingham Laboratory site, opposite NIAB’s home for the past 100 years.

The development of the new headquarters involved the demolition of old workshop and farm buildings, refurbishment of existing offices and laboratories, and the construction of a new three storey Crop Science Building and a full height reception atrium plus conference room.

“We firmly believe it will help improved collaboration and communication across NIAB and with the new Crop Science Centre partnership, and provide much improved facilities and flexibility in working spaces.”

The new headquarters is also the base for the Crop Science Centre - a partnership between NIAB and the University of Cambridge –working with industrial partners to translate the University’s strong fundamental plant research into outputs for the farmer, processor and consumer, both in the UK and across the world.

The Centre will be home to researchers and students from the University’s Plant Sciences and sister research departments, the Cambridge Sainsbury Laboratory, and other UK and international research institutes.

The opening of the Lawrence Weaver campus comes just nine months after NIAB moved into two new office and laboratory buildings at its neighbouring Park Farm site to the north of Cambridge.

Park Farm was already home to the MacLeod Complex - NIAB's 2,500m2research glasshouses - as well as the Sophi Taylor Conference Centre. The new ‘barns’ include stores for onions and potatoes, seed stores for the pathology and genetics and breeding teams, sporeproof growth rooms and analytical services laboratories and offices.