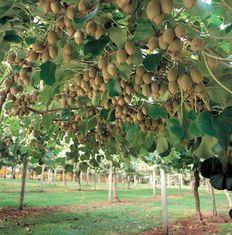 New Zealand’s government has announced the arrival of the Psa kiwifruit disease is to be the subject of an independent review.

The announcement has been welcomed by Horticulture New Zealand, which represents all of the country's 7000 commercial fruit and vegetable growers on issues facing the industry.

President Andrew Fenton has said he believes there are basic queries that need to be answered that there usually isn’t enough time to consider.

“The first question growers ask after the discovery of any new pest or disease in this country is ‘where did this come from?’” he said.

“And their second question is usually, ‘can we make sure this doesn’t happen again?’

“However, the reality is all our resources go into figuring out how to survive with the new pest or disease in the environment, and we have little time or resource left to evaluate how it got here.”

Asiafruit has reported New Zealand’s Ministry of Agriculture and Forestry (MAF) is reviewing its rules about the importation of plant material after new research has shown that live Psa bacteria can be found in kiwifruit pollen taken from closed flowers.

Regulations at the time of the outbreak allowed pollen to be imported into the country provided it was taken from inside closed flowers.

A MAF media release stated pollen imports were suspended at the time of the outbreak as it was suspected as a possible vector for the disease. It added, however, that at that time there was no internationally published science showing pollen was able to spread Psa.

MAF director general Wayne McNee said it was too early to link imported pollen to the outbreak.

Fenton has said he hopes a comprehensive review will emphasise the importance of the industry and government sitting down together and working out how pests or diseases can be tackled before they arrive.

He added: “Basically what the Minister is saying by asking for this review, is that he needs more answers. And we certainly support that.

“We support any effort to review and improve the biosecurity pathways into this country.”

Despite having been an inaugral member of the board since HortNZ formed in 2005, Collin must leave the board because he no longer holds the required grower status to be a director.

Fenton said: “It is disappointing to lose a director of Ru’s enormous experience, but all directors must retain their grower status throughout their term.”

In line with the HortNZ Constitution, the Board has co-opted a member to serve the remainder of Collin’s term, which expires in 2014.