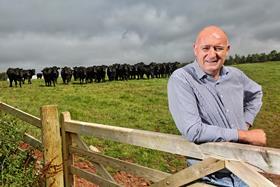 The English and Welsh farming unions NFU and NFU Cymru have expressed concern over the implications to British farmers of a free trade deal with New Zealand, announced in principle yesterday (20 October).

Commenting on the agreement reached by UK and New Zealand negotiators, NFU Cymru President, John Davies said: 'I view this latest announcement with great apprehension for future generations, and as further confirmation of the UK Government’s agenda of liberalising trade with some of the world’s largest agri-food exporters, an agenda which has the potential to seriously threaten Welsh farming in return for no tangible benefits that we can see.

“With this announcement, the UK Government’s direction of travel is abundantly clear. It leaves me particularly worried about the cumulative impacts successive trade deals will have on Wales’ farmers, as slowly but surely the floodgates are thrown open to imports from all over the world. We need a detailed economic assessment from the UK Government of the predicted cumulative impact on Welsh agriculture of UK trade policy. However, my concerns go further than economics - if our financial viability is threatened, then the social and cultural fabric of our rural communities will be threatened, as well.”

NFU President Minette Batters echoed this sentiment: “The announcement of this trade deal with New Zealand, coupled with the Australia deal signed earlier this year, means we will be opening our doors to significant extra volumes of imported food - whether or not produced to our own high standards - while securing almost nothing in return for UK farmers. We should all be worried that there could be a huge downside to these deals, especially for sectors such as dairy, red meat and horticulture.

“The fact is that UK farm businesses face significantly higher costs of production than farmers in New Zealand and Australia, and it’s worth remembering that margins are already tight here due to ongoing labour shortages and rising costs on farm. The government is now asking British farmers to go toe-to-toe with some of the most export orientated farmers in the world, without the serious, long-term and properly funded investment in UK agriculture that can enable us to do so. This is the sort of strategic investment in farming and exports that Australian and New Zealand governments have made in recent decades. There needs to be a coherent approach across government to bolster UK farming’s productivity.

“It’s incredibly worrying that we’ve heard next to nothing from government about how it will work with farming to achieve this. This is why it is very, very difficult for the NFU to show any support for these deals. They involve significant upsides for farmers on the other side of the world who can now access our hugely valuable market but contain little discernible benefit for UK producers, either at home or overseas. This could damage the viability of many British farms in the years ahead, to the detriment of the public, who want more British food on their shelves, and to the detriment of our rural communities and cherished farmed landscapes.

“Instead of repeating the refrain that these deals will be good for British agriculture, our government now needs to explain how these deals will tangibly benefit farming, the future of food production and the high standards that go along with it on these shores.”

Commenting on the trade deal with New Zealand - a huge apple exporter - trade body British Apples and Pears chair Ali Capper said it could offer the UK sector opportunities in areas of research and export partnership: 'The liberalisation of trade between our two countries is a one way deal - the UK has almost 70 million consumers and New Zealand less than 5 million so this deal benefits New Zealand apple and pear growers but is of less interest for British growers.

'In a world where food miles matter it does not make sense to import our national fruit from the other side of the world with a much higher carbon footprint when today we can grow, store and sell British apples and pears to British consumers for 12 months of the year.

'British apple and pear growers are outward looking and many are successful exporters all over the world today. We have good friends in the industry in New Zealand and welcome much closer ties. We would like to see the trade deal opening up opportunities for scientific collaboration between our two counties, for example the UK is a world leader in rootstock breeding and New Zealand in varietal breeding. We would also like to see new opportunities for a joint export initiative, one that joins our two seasons together to create 365 day supply to the rest of the world - together we could be a powerful partnership.

'We would welcome the opportunity this deal offers to discuss a much more powerful partnership with our friends at New Zealand Apples and Pears Inc.'