Opinion: Why solar is a good use for land 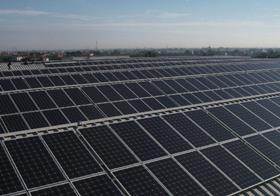 Why would you ever put solar on prime agricultural land? It’s a good question, and cuts right to the heart of the ‘food versus energy’ debate that looms large over any discussion of energy production on farmland.

What’s more, the answers seem obvious: You wouldn’t, surely? Yet I would argue that there are indeed situations where we could, and should, be using high-quality agricultural land for non-food purposes.

I’d also stress that the ‘either/or’ thinking, that assumes it must be food or energy, is part of the problem. Any such binary take on land use reduces complex systemic challenges into massively-simplified trade-offs. For starters, there are a number of ways in which energy production can complement food production, as it does not necessarily require the exclusive use of the land on which it sits. Alternatively, ground-based solar PV is compatible with flower-rich meadow habitat. Given that the UK has lost some 97 per cent of such habitat since the 1930s, ground-based solar could make it economically viable for farmers to help restore this critical habitat.

Bear in mind that we’ve lost this habitat precisely because land has been brought into agricultural production – and that restoring it would likely involve taking land out of production. But if we value biodiversity protection then we should envision situations where even high-quality agricultural land should be used for non-food purposes. My hope would be that, by providing some space for pollinators, a system that sees ground-based solar paying for meadow-based biodiversity might actually boost food production in neighbouring agricultural land.

Even in the world of bioenergy, you can find stories of energy production complementing – rather than competing with – broader goals. One farmer we spoke to was concerned that, on one of his poorer-quality fields, he only had a three-crop rotation (which isn’t great for soil management or disease control). By squeezing in some low-quality maize – grown as an anaerobic digestion feedstock – he was able to switch to a four-crop rotation.

Given the precarious nature of many small-scale farming businesses, an argument can also be made that energy production can provide critical income for farmers – helping ensure they remain viable businesses, and thus enabling them to continue providing us all with food.

Just to be clear, I’m not calling for a blanketing of the countryside with solar panels, or for a wholesale embracing of energy crops. I do, however, think that if we get energy right, it can support food production – and many of the other beneficial services we’d like our farmland to provide.

But ensuring that we get energy right is no easy task. To do so, we’ll need continued and substantive effort from government, the energy industry and the farming community alike.