"Plastic alternatives could be worse for environment" 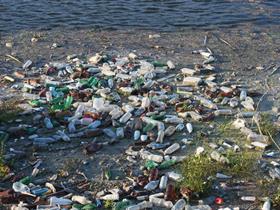 Supermarkets are switching plastics for other materials that could be worse for carbon emissions according to sources in a new report from Green Alliance.

The report, prepared for the Circular Economy Task Force, warns of “kneejerk” responses by the food and grocery industry to plastic reduction demands, potentially leading to worse environmental consequences.

“We are aware that [by switching from plastic to other materials] we may, in some cases, be increasing our carbon footprint,” one supermarket representative told the Green Alliance.

The report, titled 'Plastic Promises: what the industry is really doing about packaging', interviewed anonymous representatives from five of the UK’s leading supermarkets, alongside other food industry figures, and shows a pattern of concern over the rush to ditch plastic, prompting “greenwashing” from businesses.

“The past year has just really pissed me off no end with companies coming out and boasting about not using plastic, even when they’re in single-use glass, and their carbon emissions are going to be off the scale,” another supermarket figure told Green Alliance.

The report continues: “One respondent called the process ‘fairly quick and fairly cut and dry’, prompted by a mandate to office managers to ‘be more environmentally friendly’ which results in ‘a kneejerk reaction to exit plastic’.

“One supermarket representative said: ‘There are people who would like us to take plastic out of the soft drinks section and replace it with something else like glass and Tetra paks, which aren’t recycled [in the area].” The same respondent added: there is “not a lot of joined up thinking going on’.

“Another noted: ‘I think there’s a lot of pressure to move to alternatives, which aren’t necessarily better from an environmental and climate impact point of view’.”

Demand for recyclable or biodegradable packaging has been growing in recent years, and escalated dramatically following the airing of David Attenborough’s Blue Planet series, which captured footage of marine-life repeatedly ensconced in the millions of tonnes of plastic that has blighted the oceans.

One supermarket said it had seen an 800 per cent uplift in queries about plastic packaging from customers in the last year alone.

Despite this, the Green Alliance's report points out that the overall amount of plastic on the shelves 'has not altered significantly'.

Cross-sector initiatives such as Wrap’s UK Plastics Pact have sought to respond, by setting clear goals for industry, including the elimination of single-use plastics by 2025, and 70 per cent of plastic being effectively recycled or composted.

“We would like to see people working together to come up with a consistent methodology that would stop any sort of misleading claims to consumers,” one supermarket representative told Green Alliance.

According to the report, several interviewees shared a desire for a more standardised and transparent approach to lifecycle assessments, which could help them make better informed decisions to avoid unintended consequences.