PM would "rather die" than hurt UK farmers 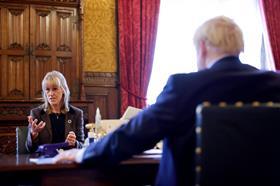 Prime Minister Boris Johnson told the NFU president that he 'would rather die than hurt British farmers' when they met at no 10 last week, the Times reports.

Minette Batters said Johnson uttered these words at the close of their meeting last Thursday during which she urged him to rethink the government's refusal to ensure imported food meets domestic standards after Brexit.

Asked whether she thought she had succeeded in convincing him, Batters told the Times: 'He said, 'I would rather die than hurt British farmers,' and I think he really means that.'

According to the Times article, Batters said she told the Prime Minister that they both had a moral duty to set the right course for the future of British agriculture, and showed him the million-strong list of those supporting the NFU petition to amend the Agriculture Bill now going through its last stages in parliament.

'I explained to him that we now have this extraordinary unprecedented tsunami of a coalition from the best chefs, all the farmers across the country, the environmentalists and all the NCOs, even the mammals' association,' she is reported to have said.

Batters explained her request for a UK trade standards commission with experts on the environment, sustainabiity, animal welfare and food safety allowed to scrutinise any potential deal.

'He looked surprised when I made the point that the US has exactly the same thing, an independent trade commission that reports into Congress,' she is quoted as saying.

Asked why she thought the government voted against the food standards proposal last week, Batters said: 'I think there has been ping-pong between Defra and the department of trade. They are on different pathways, but only the prime minister can decide his priorities. He is overrun with things, some small, some huge to be sorted out, but it is clear to me now that he just has to make a decision, however tired he is; we can't just drift towards disaster.'

In her interview with the Times on meeting the prime minister, Batters said: 'He looked like a man understandably with the world on his shoulders so I said, 'I want to take farming and food off your desk and I can do that. There is a viable plan.'

'I ended the meeting by saying, 'Look, Prime Minister, I will carry you aloft myself on my shoulders to achieve this.' He laughed and said he'd have to lose a bit more weight.'