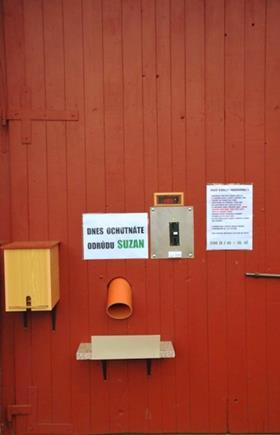 A potato grower in Czech Republic has unveiled a novel idea to promote local produce: a potato vending machine.

According to Brno Daily the Vesa Velhartice farm, in the western Plzen region of the Czech Republic, constructed the vending machine on the side of a storage barn, and is already attracting around 60 customers a day.

Shoppers insert 30 CZK (roughly equivalent to one pound) for two kilos of potatoes, which triggers a conveyor belt to bring the potatoes down a chute, conveniently dropping into customers’ bags.

According to Vesa Velhartice director Viktor Kopacka, the contraption was conceived to help promote Czech potatoes, and encourage local buying.

“We border Velhartice castle, and breed several varieties of potatoes, which we also sell. There are a lot of people going past us to the castle, so we took the opportunity to promote our varieties. We sell exclusively what we grow on our land,” Kopacka said.

“It was meant for people to taste our potatoes and find them delicious. Of the varieties on the Czech market, about 80 per cent are foreign and only 20 per cent Czech. We think we have good varieties that should be eaten more at home.