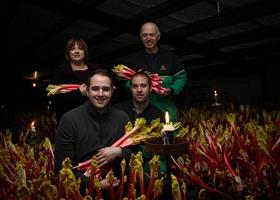 The fourth and fifth generations of Oldroyds

It’s not often you come across a king and a high priestess within the same family, let alone in Yorkshire. Yet that is exactly what you find at produce pioneer E Oldroyd & Sons – a fifth-generation fruit and vegetable grower near Leeds, whose name today is synonymous with forced rhubarb.

The company’s produce history can be traced back centuries to Cambridgeshire, reveals Janet Oldroyd Hulme – the farm’s fourth-generation manager, affectionately known in the media as the High Priestess of Rhubarb for her tireless work championing the product. But the firm established its Yorkshire rhubarb roots much later, in 1930, when Janet’s great grandfather John Richard Oldroyd – a successful fruit grower – left Wisbech, destitute, for Wakefield to join his daughter, having lost everything in the Great Depression.

“John moved to be near Martha, and rented land at nearby Pymont farm – which he subsequently bought, and we still own. The farmhouse wasn’t included in the rent, so he slept on the floor of one of the outhouses as he began to rebuild his business,” she says. “Before long, he befriended a local rhubarb grower, and, in exchange for passing on his expertise at producing strawberries – a Cambridgeshire staple – was taught the secrets of forcing rhubarb, Yorkshire’s speciality.”

Indeed, the area between Leeds, Wakefield and Bradford was the global Mecca of forced rhubarb production at that time – known then, and still today, as The Rhubarb Triangle. From its Victorian beginnings to wartime heyday, the triangle’s business boomed and grower numbers increased to well over 200 families.

Yorkshire was the first place in the world to erect special sheds (horticultural cathedrals, some might say) for the purpose of growing rhubarb out of season, Janet explains. Production was shrouded in mystery, with revered forcing techniques closely guarded by local families, and the product itself grown in darkness and harvested by candlelight – a tradition Oldroyd & Sons continues to this day.

Once established among the Yorkshire Triangle ranks, John’s reputation as a quality rhubarb supplier grew. So much so that, in 1933, his eldest son Ernest travelled from Wisbech by horse and cart to lend a hand, bringing his toddler, Ken, along too.

“My father, Ken, said that, as a child, he was always intrigued by what was going on behind the forbidden door [of the forcing shed], which his father and grandfather kept disappearing through for hours on end,” Janet reveals. “A door he wasn’t allowed to open, because children and a densely packed forcing shed do not mix!”

Until one day, when Ken clearly was deemed old enough to behave appropriately, John took his grandson’s hand and led him into that hallowed place.

“My father just couldn’t believe what he saw,” says Janet. “He said the beauty of it took his breath away. And he knew, in that instant, growing rhubarb was what he wanted to do.”

To say Ken devoted his life to rhubarb production is no exaggeration. Yet, according to his daughter, he very much got the rough end of the deal.

Soon after he took over the reins of the company from his father in 1949, the Yorkshire Triangle’s rhubarb empire started to crumble. Having devoured it for over a century – with particular gusto during rationing in the 1940s – the post-World War II generation, it turned out, could no longer stomach the stuff. Demand plummeted, and by the early 1960s, Yorkshire farmers were abandoning production in their droves.

Not Ken. Quite the opposite. He set about trying to save the industry he believed in so passionately: first through persuasion, then by taking matters into his own hands.

“As chairman of the Yorkshire Rhubarb Growers’ Association, he kept telling members that they must hold on; that people would return to rhubarb,” says Janet. “Then he decided he needed to do more. He set about earmarking the abandoned rhubarb farms that he wanted to save, went to auctions and bought them up, one by one.

“He had a very understanding bank manager who loaned him the money,” she explains. “He’d tell my father not to go above a certain limit. But he often did. He was quite a determined person and paid whatever it took to rescue a farm he believed in. I’m so glad he lived long enough to see that he was right – that his efforts were worth it, and that people did return to rhubarb.”

Ken’s endeavours to save the Yorkshire industry earned him the title locally of ‘Rhubarb King’. He became a rhubarb advisor at Stockbridge House Horticultural Research Station and was awarded the Northern Horticultural Societies’ highest accolade, The Harlow Carr Medal in 1995 for services to rhubarb.

“My father always used to say: ‘Look after your [rhubarb] roots and your roots will look after you’. That philosophy has stayed with our company,” says Janet, who left her job as medical scientific officer at St James Hospital in Leeds to join the family firm in 1979. She immediately made her mark, famously taking a scalpel to a miniature rhubarb root, thus pioneering an entirely new method of encouraging rapid propagation on her very first day.

“When I joined, women weren’t involved in farming. It wasn’t envisaged at all,” she recalls. “But my father was always one to look at new developments and take them on board. He realised that if you didn’t move forward and progress, you died as a business.”

Janet’s two sons, Lindsay Richard Hulme and James Neil Hulme – the fifth generation of Oldroyds, are today integral to the running of the company, which in peak season employs over 80 people to supply wholesale and retail with traditionally-produced rhubarb, and more recently, strawberries, among other products.

“Everyone hopes that their company will stay in the family,” says Janet. “James’ sons are obsessed with farming – but they are only four and five years old, while Lindsay’s son is currently obsessed with football!

“We were never told by my father this is something you should do,” Janet adds. “We were just drawn to it. It’s something in the blood.

“My father left a great legacy – a rhubarb industry that survived thanks to his determination and dedication, and a company he worked so hard to build that produces yearly around 1,000 tonnes of rhubarb for the UK market and is currently involved in a large expansion programme,” the High Priestess of Rhubarb concludes. “I certainly hope Oldroyd & Sons continues into the future for many generations to come.” Amen to that.