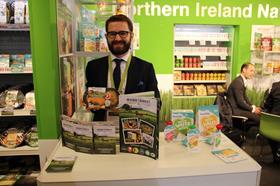 Grower and food manufacturer Mash Direct said its latest addition of premium vegetarian burgers has become one of its best sellers despite only being launched this year.

Director Jack Hamilton said the firm had spotted a gap in the market for a vegetable burger made with good quality produce, compared to the usual offering that is typically perceived as a side or low-quality option.

The burgers are produced at the firm’s farm and factory site in County Down, Northern Ireland, using produce grown on the farm.

They are available in independent retailers, all the multiple retailers in Ireland and Northern Ireland, and in Asda and Ocado in England.

Already exporting to the Middle East, Hamilton said the company is now looking to export to the United States where the convenience market is more mature than Europe.

The company was exhibiting at the Sial food show in Paris this week, where Hamilton also released some details about the company’s Christmas lines, including cranberry insertion into existing products, as well as smaller versions of mash balls.

“We supply the catering and foodservice trade, including the largest gastro-pub chain in England. But future growth is with the multiple retailers,” he said.

Mash Direct was established ten years ago after a fifth generation grower decided to invest in food manufacturing equipment, and it now has an average turnover of £15 million and offers 40 lines.