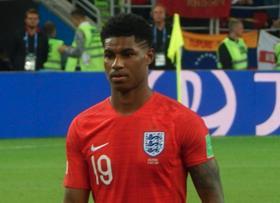 England footballer Marcus Rashford has launched a petition on the Parliamentary Petition website calling on the government to support vulnerable children by implementing three key recommendations from the National Food Strategy.

Rashford, who was recently made an MBE, wants to see expansion of free school meals to every child from a household on Universal Credit or equivalent, reaching an additional 1.5 million 7-16 year olds.

He is also calling for expansion of holiday provision - food and activities - to support all children on free school meals, reaching an additional 1.1m children. And an increase in the value of Healthy Start vouchers to £4.25 per week (from £3.10) and expanding into all those on Universal Credit or equivalent, reaching an additional 290,000 pregnant women and children under the age of four.

The #endchildfoodpoverty campaign is supported by Rashford's Child Food Poverty Task Force, as well as a further 20 charities and key names in the food industry. They are calling on government to allocate sufficient budget to the three National Food Strategy recommendations, as part of an urgent recovery package for vulnerable children this autumn.

New data from the Food Foundation reveals that 18 per cent of 8-17 year olds, some 1.4m children, reported experiences of food insecurity over the summer holidays. That included having to eat less and make food last longer because of lack of money to buy more; parents not eating because there wasn’t enough food at home; and children being hungry but not eating to avoid using up food at home.

Other findings include children not eating a proper meal due to lack of money for food, eating at a friend’s house because there wasn’t enough food at home, and worrying about going hungry during the October half term.

The Food Foundation is also launching the Children’s Right 2 Food Dashboard, described as a one-stop-shop for data and research on what children across the UK are eating and the effects on their wellbeing and long-term health.

Rashford said: “For too long this conversation has been delayed. Child food poverty in the UK is not a result of Covid-19. We must act with urgency to stabilise the households of our vulnerable children. In 2020, no child in the UK should be going to bed hungry, nor should they be sat in classrooms concerned about how their younger siblings are going to eat that day, or how they are going to access food come the holidays.

'The school holidays used to be a highlight of the year for children. Today, it is met with anxiety from those as young as seven years old. Many have said that education is the most effective means of combating poverty. I do not disagree with this statement, but education is only effective when children can engage in learning. Right now, a generation who have already been penalised during this pandemic with lack of access to educational resources are now back in school struggling to concentrate due to worry and the sound of their rumbling stomachs. Whatever your feeling, opinion, or judgement, food poverty is never the child's fault.

'Let's protect our young. Let's wrap arms around each other and stand together to say that this is unacceptable, that we are united in protecting our children. Today, millions of children are finding themselves in the most vulnerable of environments and are beginning to question what it really means to be British. I'm calling on you all today to help me prove to them that being British is something to be proud of.'