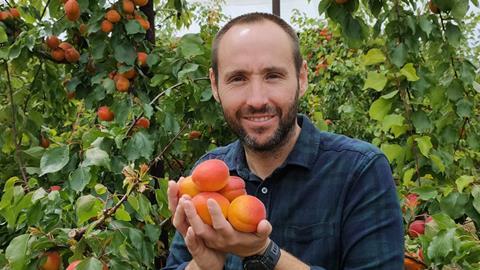 British growers are predicting their largest-ever apricot crop this summer.

According to Tesco – which reports that this year’s bumper harvest hits shelves this week, selling at £1.50 per punnet – the English apricot harvest will reach 250 tonnes this season.

That should see the crop last into September, making the UK the only country in the world still in production at that time of year.

Tesco points out that the current situation is a far cry from 10 years ago, when a few Kentish fruit farmers produced a total of around 40 tonnes, which sold out as quickly as they hit supermarket shelves.

The supermarket says it began working with local growers in 2009, with a view to launching major-scale English apricot production. Stonefruit buyer Maria Katsipi explained: “The apricots are grown in what is known as the ‘Garden of England’ – an area that produces arguably the best apples, pears, and strawberries in the world because of its gentle slopes and fantastic microclimate.

“Now 10 years on, the quality of the apricots grown this year that will hit our shelves are world class – as good if not better than the ones produced in France and Portugal. UK shoppers have a great affinity for British-grown fruit and can’t get enough of these English apricots.”

Tesco started working on a production partnership with supplier DPS back in 2010. Until this century British apricot production was not thought possible because of its cooler climate, but the arrival on the market of apricot cultivars bred especially for cooler climates and flowering later in the spring made British production possible.

David Moore, owner of Home Farm, near Maidstone, is now the UK’s biggest grower of English apricots, and Tesco’s main supplier. He hopes to produce a record-breaking 136 tonnes this summer. “Production has really improved in the last 10 years and we are now far better prepared for the changeable British weather,” he said. ”Ironically, the cooler British night-time temperature produces very high quality apricots as the fruit grows more slowly, resulting in a more intense and sweet taste plus a stronger, richer colour than imported varieties from France and Portugal.

“In the last 10 years we’ve learned about understanding the light needs of fruit ripening for these new varieties and so we have adopted our pruning style to maximise the amount of light reaching the fruit-bearing parts of the tree.

“In addition we have had to learn how to combat the effect of frost in the early season growing stages and we now have an insulating crop cover structure to protect the crop from the extremes of the UK climate.

“This year has been a very good growing season with the right amount of rain, sunshine and the recent heatwave has helped create a high-quality crop.”