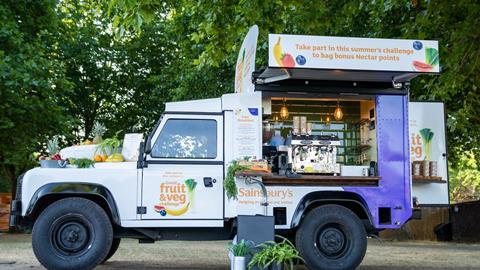 Sainsbury’s has created a ‘Vegfast Van’, offering a series of free breakfast items on the back of research showing that over 25 million British adults don’t eat enough fruit and veg.

Research commissioned by Sainsbury’s and Nectar indicates that the average Brit consumes 3.25 portions of fruit and veg a day, which equates to 65 per cent of the 5 A Day target.

The average adult doesn’t eat their first piece of fruit or veg until 1.58pm, the study found, while 27 per cent don’t have any until dinnertime and less than one in 10 (9 per cent) say they consider fruit and veg at breakfast.

When questioned why, one in four (25 per cent) said they forget about it, while 13 per cent don’t know how to incorporate it within meals outside of dinner.

To inspire Brits to eat more fruit and veg and try new recipes, Sainsbury’s and Nectar have created the Vegfast Van, which will tour the UK this week and offer passers by a selection of free breakfast items as well as up to 750 bonus Nectar points when they take part in the ‘Great fruit & veg challenge’.

While UK adults might not be eating enough fruit and veg, Sainsbury’s research suggests parents are much more fastidious when it comes to their children. Some 42 per cent say they feed their child fruit or veg at breakfast time, with 74 per cent saying their child usually eats the recommended daily amount for their age group.

Despite that, nearly half (47 per cent) say this reduces during the school summer holidays when routines go out the window.

Sam Burston, director of Nectar and loyalty at Sainsbury’s, said: “When you’re doing the food shop week-in, week-out, it can be challenging to think of new recipes and to feel inspired to try something different – particularly during the school summer holidays when routines can go out the window.

”That’s why we are bringing back the Great fruit & veg challenge and looking to inspire our customers to try something different through the Vegfast Van - showing them how easy it can be to pack their breakfast full of fruit and veg while getting more out of their Nectar points balance. We want to support our customers to eat delicious food that is good for them and the planet, and the return of the Great fruit & veg challenge is just one of the many ways we’re helping everyone eat better.”