Special report: The champagne of potatoes 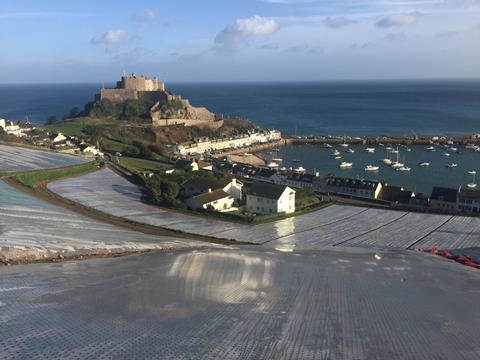 Jersey has protected name status for its Jersey Royal potatoes

Brexit will affect – or is already affecting – almost every business in fresh produce, but not many have the very essence of their brand at stake.

Despite some reassurances growers of Jersey Royals are still entertaining the possibility that when Britain leaves the EU, they could lose their Protected Designation of Origin mark – similar to that given to champagne. This requires them to grow the salad potatoes and their seed on the island if they want to use the Jersey Royal brand name.

The purpose of the geographical indication scheme, introduced by the European Parliament back in 1992, is to protect the reputation of regional foods and help local producers command a premium price for their authentic products. The two companies growing Jersey Royals – the Jersey Royal Company (JRC), sister company to potato supplier Greenvale, and Albert Bartlett – have been calling for its continuation.

Albert Bartlett’s sales and distribution director Tim Ward says there have already been extensive talks with Defra, which is looking to introduce a carbon copy of the EU scheme, as well as a reciprocal agreement with the EU to recognise one another’s Protected Food Names.

William Church of the JRC is also “fairly confident” the product will maintain its designated mark of origin, but he recognises that there is a threat to this status when Britain withdraws from the EU. “The PDO is our stamp of authority,” he says. “Without it we become just another potato.”

PDO status, which is a badge of honour for the two businesses selling under the marque, feeds into the company’s story about the heritage of the brand. Varietal development is out of the question for protected varieties and any changes must be made to how the product is grown rather than what is planted.

This is putting pressure on JRC and Albert Bartlett, which are starting to face tough competition from rival growers in Cornwall, Suffolk, Ayrshire and Pembrokeshire, as they begin to breed new early varieties to eat into Jersey Royals’ as yet uncontested May sales window.

“Ideally we will sell more than half of our volume in May,” says JRC managing director David Rankin. “The way our pricing structure works, we’ve really got May to ourselves. Once you get to June you get the early Cornish, and Suffolk starts coming in, you’re under price pressure so the more you can sell in May, the better.”

In total the JRC and its contracted growers produce around 25,000 tonnes of potatoes a year, accounting for roughly 70 per cent of the island’s production. Albert Bartlett makes up the remaining 30 per cent of production and between them, the two companies supply all the big four retailers.

In recent years the discounters have also been getting in on the act, embracing the premium salad potatoes as they try to attract a wider portfolio of shoppers. “The discounters have consistently overtraded in potatoes in past few years and have ended up taking a lot of volume,” says Church. “They are definitely not to be sniffed at.”

The key point of difference between the discounters and the big four is that Aldi and Lidl traditionally run fewer SKUs and have a highly focused promotion strategy based around their Super 6 and Pick of the Week promotions. “They’ll pile the Jersey Royals high and sell them at a really cracking deal,” says Church. And now Aldi and Lidl want to extend this sales window further. “If you go back six or seven years, they would have entered the market much later when the price had already dropped,” he says, “but they now like to have an offer over the whole season.”

While product will not hit supermarket shelves for another two to three weeks, restaurants and caterers can already source Jersey Royals from wholesale markets thanks to the Jersey Royal Company’s 120t of glasshouse production. “When it goes onto the wholesale market and it’s going out to delis, some of the celebrity chefs will get hold of it and they’ll start talking about Jersey Royals,” says Church. “You’re starting to build the whole fervour that the Royals are coming.”

Ward reports that Albert Bartlett has made a number of “tweaks” to the way its growers produce the crop for export to UK retailers. While traditional methods are still used by the company’s growers, many of whom are fifth-generation farmers, changes have been introduced to meet rising demand for small tubers in the washed-for-convenience market.

Out in the fields, growing conditions have already been challenging, with eight or nine consecutive days of frost damaging sections of the crop in January. Tony Freitas, JRC farm manager, can’t remember the last time in his 35 years at the company that he saw such a prolonged frost, but when it comes to rainfall, conditions have so far been more favourable than last year. In 2016 the island experienced its wettest start to the year since records began in 1894.

As well as affecting production, the weather plays an important role in driving – or hindering – sales of the potatoes. “If it goes cold, nobody wants to go and buy salad potatoes,” says Church, not mincing his words. This is what happened in 2015 when Britain experienced a cold spell, which limited consumers’ appetite for the spring spuds. But last year, by contrast, demand was high and JRC stayed on top of the crop, picking slightly early to maximise its sales. “We had slightly restricted supply and demand remained strong so everything that was grown was sold very well,” says Church.

In spite of this encouraging sales performance, the company is under no illusions about the scale of the task it faces. “The island has probably taken its eye off the ball in terms of the exposure we give the brand and the name,” says Rankin. “We’ve got a big job to get the brand out there and to get people to recognise it again.” And not only is the company under pressure from its salad potato competitors, it is also struggling against an overall decline in potato consumption – volume sales of salad potatoes have decreased by 20 per cent since 2014. Increasingly time-poor consumers – especially families with dependent children – are opting for quicker-to-cook rice and pasta ahead of potatoes, and JRC is mindful that it must step up its marketing to attract new consumers.

“We need to get our customers to promote Jersey Royals a little bit more,” says Rankin, “not by throwing millions of pounds at TV adverts, but through point-of-sale promotion. If we could just get a snapshot of what goes on over here in Jersey in the store at the shelf, I think it would do a huge amount for our sales.”

The company is currently exploring new formats and pack sizes as well as in-store point of sale promotion, and Google banner advertising, which was tested for the first time last year. Social media is also a major focus because the younger generation aren’t reading as many magazines though they are online, says Greenvale marketing manager Tracey Mattock. “We’ve got to keep telling that story and looking for new ways to tell it,” she says.

As Brexit looms, the Jersey Royal growers know the importance of holding onto their PDO status, but telling the story is also key. As Rankin puts it: “We can’t rest on our laurels; the brand alone won’t carry us.”