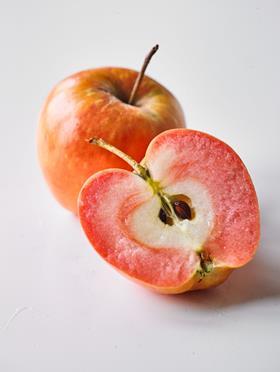 The first British-bred Sunburst apples of the season will be on Waitrose shelves next week, with Scion Fruits reporting that the 2019 crop is the best yet.

The third commercial campaign for the pink-fleshed variety will feature the most consistent crop of apples to date, in terms of size, flavour profile and appearance.

The overall quality of the fruit, both internally and externally seems to improve with each season, according to the teams atNIAB EMRandScion Fruits, who have collaborated to grow and market Sunburst in the UK.

Sunburstis a conventional cross between Gala, lesser-knowntraditional garden variety Falstaff and the purple-fleshed Pink Pearl. Scion Fruits director Martin O’Sullivan said the flavour and appearance profiles of the fruit this year show continued progress in the orchard and will give consumers an even better impression of the tongue-tingling taste sensation that the unique variety offers.

“Sunburst has already proven to be popular with consumers of all ages and pleasingly, it seems to particularly appeal to children,” O’Sullivan added. “Apple breeding is a long-term business and for Sunburst to meet its potential in the next 20 or 30 years, it really has to be a hit with the next generations of consumer, as well as the adults and children of today.

“The distinctive pink blush and pink flesh is obviously a great point of difference, but right from the start, the main focus has been on taste. The early signs are extremely promising,” says O’Sullivan. 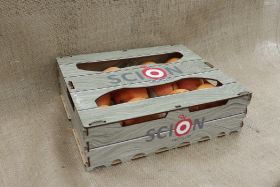 For an apple variety, the flesh of Sunburst is unusually high in anthocyanins, the same compounds linked to many health benefits that have led to other fruits being labelled superfoods. Its distinctive taste has left many experts at a loss in terms of tagging the fruit as similar to any other, but everyone is agreed that “tropical” fits the bill.

Graham Caspell, head of farm and horticultural services at NIAB EMR, saidthat Sunburst has a real wow factor, not only for those who eat it, but also for growers and marketers. “I have been around for more years than I care to remember,” he said, “but I have never worked with a more exciting variety than Sunburst. We are still learning about the variety in the orchard each year andI’m producing a blueprint for growers going forward that will be combined with scientific research to guide growers towards the best and most efficient way to grow Sunburst successfully.

“What we know for certain is that it has all the hallmarks of a huge commercial hit that will prove its worth to everyone involved.”

Scion Fruits has made a significant investment in bringing volume to market andan aggressive planting programme will see volumes surge in seasons to come.O’Sullivan believes Sunburst’s taste and texture stand up against any other apple in the market. “Industry and consumer feedback has been excellent and we’ll be measuring again this year – based on what we’ve picked, we’d expect an even more positive response,” he explained.

“By 2024, we expect to have 200,000 trees in the ground in Europe.The eventual aim is to grow Sunburst around the world, so it can be provided to the consumer all year round.”

Mario Caccamo, managing director at NIAB EMR, said:“The objective at NIAB EMR is always to breed varieties that are good for consumers, good for growers and good for the environment. With Sunburst, we’ve definitely met all three of these objectives.”