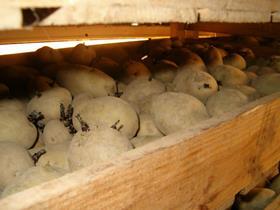 The UK Department for Food, Environment, Food and Rural Affairs (Defra) has restricted imports of seed potatoes from the European Union after deciding not to renew a six-month authorisation.

The six-month grace period had allowed imports from European Countries since the end of the Brexit transition period on January 1. But UK ministers said they will now consider applications to market imported seed potatoes from the bloc on a case-by-case basis following an industry-wide consultation.

This comes after the European Union refused repeated requests by UK ministers to authorise the export of seed potatoes from Britain since January 1, 2021.

Brussels has banned the export of seed potatoes from the UK to the EU since 31 December 2020 after the Trade and Cooperation Agreement failed to agree equivalence on the goods.

A Defra spokesperson said: “This approach recognises the fact that the UK is broadly self-sufficient in the total quantity of seed potato production, while retaining a mechanism to consider future marketing authorisations as necessary.

“We also continue to press the EU to reconsider its position, in line with its own regulations, on the import of seed potatoes from Great Britain to the EU.”

Up to 10,000 tonnes of seed potatoes are imported annually from the EU for planting on British farms. However, the UK exports about 30,000 tonnes to EU countries, worth £13.5m, the majority of which come from Scotland.

Scottish farming chiefs welcomed the news and claimed any extension to the grace period had the potential to 'devastate' the industry.

The National Farmers Union (NFU) Scotland said it hopes the decision taken by the UK government not to extend authorisation to EU seed imports will bring fresh impetus to talks that will agree equivalence and allow Scottish seed potato exports to resume.

Chair of NFU Scotland’s Potatoes working group, Mike Wilson said: “We are delighted that the principle of seed potato trade between the EU and GB having to go ‘both ways or no-ways’ has been upheld by Defra. We welcome that the UK government’s allowance for EU seed potatoes to be sold to GB has now officially been ended. This means that potato growers throughout Britain will have to source their seed from within Britain, which is good news for Scotland’s seed potato sector.”

The UK market is quite different from the EU market, so the potato sector has quite a task on its hands to develop and supply this internal market, he added.

“This will not be an easy task as the EU Commission has made it very clear on several occasions that the seed potato trade is a casualty of Brexit.”