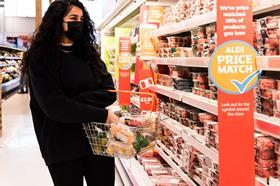 As the UK’s national lockdown eased last month, consumers grew more confident with shopping in-store, with online grocery growth slowing to 25 per cent, down from 92 per cent last month, the figures showed.

Total till sales at UK supermarkets maintained steady growth at 4.6 per cent in the last four weeks ending 24 April 2021, despite the partial reopening of hospitality, NielsenIQ said.

'Online grocery has experienced supercharged growth in the last 12 months, with sales growth remaining above 70 per cent since the start of the UK’s pandemic in March 2020. However, in the last four weeks ending 24 April, as lockdown restrictions ease and confidence returns, visits to bricks and mortar stores have increased by 3 per cent, the first increase in a year, and a significant rise compared to last month’s -19 per cent decline,' NielsenIQ said.

In terms of retailer performance, Lidl (18.2 per cent) and Aldi (10.4 per cent) grew the fastest over the last 12 weeks, NielsenIQ found. Meanwhile, Asda (4.6 per cent) and Sainsburys (3.9 per cent) were the fastest growing supermarkets of the ‘big four’ retailers. Marks and Spencer (3.9 per cent) also experienced strong growth as non-essential retail reopened and more consumers also sought food on the go items.

Mike Watkins, NielsenIQ’s UK head of retailer and business insight, said: “As lockdown restrictions ease across the UK, it is clear that shopper behaviours have changed once again with growing confidence and growing numbers returning to stores. Whilst online sales remain high, we’re noticing a rebalancing of shopper baskets as consumers spread their spend beyond the lockdown staples.

Watkins concluded: “Categories such as health & beauty, deli and bakery have experienced a boost in the last four weeks as the schools have returned and consumers are given more freedom to socialise and meet outdoors in a small group. With rules set to relax further within the next few weeks, consumer lifestyles will begin to adapt and it’s likely that we’ll see another change in grocery spend as cafes, pubs and restaurants fully reopen. How far this is set to change exactly, remains to be seen.”