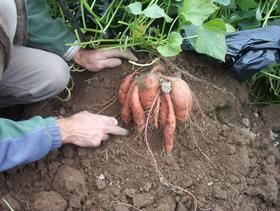 With growers in the US beginning to assess damage to crops after Hurricane Matthew, in the UK, sweet potato production is going from strength to strength.

In the past, Thorne says growers have often walked away from sweet potatoes, as it faces the inevitable difficulties in cultivation of any tropical crop being grown in a temperate climate. But he believes the exponential growth in demand, fuelled by chefs, healthy eating and the trend for superfoods, means sweet potato production has suddenly become much more enticing.

“The potential in UK sweet potato production is enormous,” he says. “The trial areas are very small but if growers stick with it for a few years they will succeed.

“We are definitely seeing more interest in it. The sweet potato demand is phenomenal and doesn’t let up – there is great potential both for growing and for retail. “I have seen a lot of people come and go. Generally they walk away because there are easier fish out there to catch. We are trying to grow a tropical crop in a temperate climate, so it’s a bit unreliable in that sense. But if we can grow them in the Black Isle in Inverness then anyone can do it.”

Thorne says he has customers in Spain, Holland, and eastern Europe, as well as further afield in Hong Kong and the Maldives. One European customer he supplied in 2016 “had a very good year” and is now looking to expand production, and the company has also had enquires from eastern Europe outside of the EU. “The European market is slightly behind the UK in terms of picking the sweet potato up, but the interest there is growing,” he adds.

Interest is also growing at the other end of the UK in the Channel Islands, where the Jersey Royal Company (JRC) is about to begin its second season of sweet potato production.

After a “promising” first year on crops grown under glass, JRC is now venturing into outdoor production, and has increased plantings threefold. The company is growing two varieties of sweet potato – Evangeline and Beauregard – which it said are suited to the mild Jersey climate and light sandy soil.

Crops were planted with a plastic covering for protection, while drip tape was used to irrigate the crops, according to technical director Mike Renouard. “Over the forthcoming years we will continue to invest in sweet potato production in order to meet the increasing demand for British sweet potatoes,” he says. “Growing this crop, without impacting on Jersey Royals, will diversify and grow our business. Plus we are in a strong position, with growing and harvesting techniques similar to Jersey Royals, we will benefit from developing existing skills that we already have within the company.”

Sweet potato production on Jersey also has the added benefit of giving the island soil a break – Renouard explains that sweet potato belongs to a different family so acts as a good break crop from pests and diseases. JRC sweet potatoes will be stocked exclusively by Waitrose stores on the island.

The North Carolina sweet potato industry says it is still assessing damage from floods caused by Hurricane Matthew but suppliers confirm that supply will be “adversely affected”.

Garry Smith of the Sweet Potato Spirit Company says: “It is too early to fully assess the impact of Hurricane Matthew. However, what is certain is that it will adversely affect overall supply and product that is yet to be harvested, and which remains viable, will generally be larger in size. This is likely to lead to a shortage of small to medium-sized sweet potatoes as the season progresses.”

The NC sweet potato industry said around half the crop had been harvested before the storm hit. Some harvesting has now resumed and forecasted cooler, dry weather over the coming weeks will help the situation. Growers also said that the Covington sweet potato variety has shown strong resilience to excessive water, including during Hurricane Joaquin in 2015.

A new form of sweet potato NPD is gathering momentum thanks to a range of premium spirits from the Sweet Potato Spirit Company.

Using crops sourced exclusively from Scott Farms, the tipples are produced in the UK. “The sweet potato market in the UK is performing strongly and demand is higher than this time last year,” says founder Garry Smith. “This demand is being driven by an increasing consumer base and appetite for a diversifying range of sweet potato-based product.”

Smith says the ambition is for the range is “to create a new category and to remain at the forefront of innovation within it, producing premium spirits that are loved by consumers and retailers”. “Sweet potato acreage on the farms has grown year on year, and as such we do not have surplus crops. Any additional usage such as those used in our spirits is only going to add to demand over the years,” he adds.