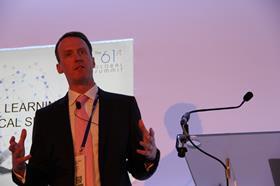 Andrew Searle, one of the report's authors, speaking in Berlin

Income inequality is creating an existential crisis in the consumer goods industry, a new report has warned, with retailers proving slow to react to shifts in consumer behaviour since the 2008 financial crisis.

The study, entitled ‘Income inequality: an existential crisis in the consumer goods industry’, demonstrates how the widening wealth gap across the world threatens the existence of consumer-focused companies by undermining the buying power of their core middle-class consumers.

“Income inequality is squeezing those in the middle with income rising slower than the goods and services they consume,” wrote business advisory AlixPartners, which presented the report to the Consumer Goods Forum Global Summit in Berlin on 21 June.

“As a result, those in the middle are likely to make more value-oriented choices to change stores, to buy less, or to switch to lower-priced products. Clearly, consumer businesses need to adapt to these trends to stay competitive.”

While income inequality has always existed, with middle-class incomes stagnating in developed markets over the past 20-30 years, the financial crisis of 2007-2008 has intensified the problem.

According to Serbian-American economist Branko Milanovic, this inequality has never been so pronounced since the Industrial Revolution.

Meanwhile, the rise of social media has publicised the wealth gap between the haves and the have-nots, making the middle and lower classes acutely aware of the elite’s spending habits.

However, as the report says, “when they turn off their screens and look at their own lives, they see nothing but stagnation”. And it is the falling spending of these middles class consumers that presents the greatest threat to the consumer goods industry.

The reasons for this are twofold, according to AlixPartners. Firstly, wealthier consumers tend to save more of their income than middle-class consumers; and secondly, they spend a greater proportion of their income on experiences such as travel and dining than on consumer goods such as fresh produce.

Consequently, the middle demographic represents “the heart of the global consumer industry”, making it “key to its future”.

Rise of the discounters

The 2008 financial crisis triggered the growth of the discount model, as more and more consumers sought out cheaper alternatives, but most of the mainstream retailers were slow to notice or react to the big shifts in income inequality.

In British food and grocery retail this opened the door to German discounters Aldi and Lidl, both of which have seen their sales and market share grow exponentially over the past decade.

Other markets such as France and the US have not yet reached this “tipping point”, but if income inequality trends continue AlixPartners expects to see a spike in shopping at discounters in these countries too.

Challenges for the industry

The core challenges for the mainstream retailers, according to the report, will be to understand changing, and sometimes confusing, customer behaviour; to halt the loss of share, customers and spend to the discount channels; and to tailor a store’s range to the socio-economic make-up of its location.

Manufacturers, meanwhile, are having to contend with issues such as the contradictory pressures for SKU rationalisation and proliferation; the loss of share and shelf space to value or private label products; and struggling to gain traction with NPD among consumers with increasing value demands.

Ultimately, the main priority for consumer goods businesses will be to become more consumer-focused in what is an increasingly fragmented market.

Despite some positive moves from retailers to adaprt their business models, a field study conducted by the business advisory in April 2007 revealed that most stores – including discounters, mainstream retailers, and convenience stores – do not rigorously tailor their assortments to local economic conditions.

Examining different retailers’ assortments for ketchup across London, cleaning products across Boston, dried pasta across Frankfurt, and crisps across Mumbai revealed that some retailers offered exactly the same range and mix for both high-and low-income areas. Others offered only a consistent range and only a slightly tailored mix.

‘These retailers – and manufacturers as well – seem to be missing a golden opportunity,” the report’s authors wrote. “As economic shifts continue to squeeze lower and middle class consumers, these shoppers will increasingly turn to private label and discounters. Consumer businesses need to capture that opportunity.”