When a banana is not just a banana 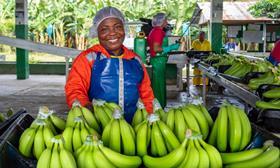 Colombian banana exporter Daabon is transforming the culture of the people living in its Santa Marta heartland with a groundbreaking project to empower the region’s women: The University of Women.

“A banana is a banana,” according to Astrid Duque, managing director of Colombia’s Daabon UK and Ireland operations. “Regardless of origin, they are pretty much the same fruit. Every piece of fruit we sell in the UK has been grown by us and shipped here through our fully vertically integrated supply chain”, she adds. If you buy bananas from Daabon though, she says, the fruit you receive is just a tiny part of a heartwarming social story.

Daabon has had organic and sustainable production methods at its core since being formed in 1914, by the Davila Abondano family that still owns it today. Its founder and driving force, Don Alberto Davila Diaz Granados, built a business with the ethos that it should not only be profitable for its owners, but also benefit the people and the environment around it. “It sounds like a cliché,” says Duque. “But he was that type of person and the business retains the same beliefs and principles to this day.”

Based in Santa Marta, in the north-western Caribbean corner of Colombia, nowadays the company is the largest direct agricultural employer in the Magdalena region. But, most importantly, Don Alberto left a legacy of a set of principles his business continues to uphold as a responsible corporate citizen.

Daabon holds all of the third-party certifications needed to trade internationally but, says Duque, “before we had them, we were already going above and beyond what is expected as part of our everyday approach. It is the right thing to do. It’s not markets driven”.

Daabon currently farms 15,000 hectares of organic palm oil and at just 400ha, its banana business is a comparatively small proportion of the business. However, it is within its banana division that a revolution has begun, one that has far-reaching consequences for the business and for its surrounding community.

“We have always worked closely with local people to promote and advocate the family philosophy we have as a company. The four pillars of our philosophy are Respect, Integrity, Sustainability and Love (or RISA, which means laughter in Spanish) and we have developed it further in recent years because we recognise the important platform we have, to change the people’s attitude towards life. We see it as our role not just to guarantee a job to our employees, but to create a sense of belonging, a feeling of responsibility and a desire to protect nature,” says Duque.

“Our industry has been male dominated, in part due to the physical nature of the work and the traditional role of women in Colombia’s rural communities. But we found a strong entrepreneurial and leadership spirit among women in our community and our sustainability director Felipe Guerrero and his team identified the areas where we could introduce more women into our processes. Where it is most evident to date is in the post-harvest phase of our banana production, which is mostly run by women. Guerrero recognised that women are more quality and care oriented, and have greater attention to detail.

Patricia Apreza, Daabon’s social responsibility manager in Santa Marta, set about establishing women’s networks and talked to women in the area about their entrepreneurial activities, with a view to harness their strengths and provide them with opportunities to expand what they were already doing, alongside Daabon. One good example is a company that makes uniforms; Daabon invested in the infrastructure of the fledgling business and guaranteed an exclusive supply deal that has allowed it to grow.

“As well as providing seed capital, Daabon also provided training, leadership and management guidance, but they own their own business,” says Duque. “It has been a big success; as you can imagine, Daabon buys quite a lot of uniforms! They supply most of the company’s annual purchases, and have expanded to provide for local services, such as the local police department and schools.”

Internally, the business has changed dramatically too. A series of women-led committees within Daabon have given the female workforce a direct line into the senior management team and allowed their voices to be heard in a much more robust way than ever before. However, the focus is more holistic than simply nurturing women who work for the business – Daabon’s commitment to help women in its local community manifests itself in several ways.

The group has created a “Women’s University” – overseen by Apreza – which is run by women working at Daabon, but also there for women who don’t work for the company. “It is all about taking the women of our communities and making them more visible – enabling them to spread the skills and knowledge that they are gaining by working in the company or formally learning, as well as the kindness and compassion that as a recently war-torn country, we need to bring people on both sides of the divide back together,” says Duque.

Biodance, a system of dance movement created in the 1960s by the Chilean anthropologist and psychologist Rolando Toro, has been introduced to further nurture a spirit of forgiveness and union. “It is liberating for the women who run it and participate,” says Apreza. “Through dance and movement, they are being healed from the psychological, physical or sexual violence of the past.”

Another project, to get families in and around Santa Marta to eat more green vegetables, sees Daabon providing knowledge to women to plant in their gardens, so they can become self-sufficient in veg and feed their families better.

“We have made amazing progress,” says Guerrero. “But we know we have to help women more and support them better. Still, women are only around 20 per cent of our workforce and we are working every day to address the gender imbalance. But the outcomes so far have been excellent. Women have always been the heads of their families in Colombia, but through our empowerment programme, many of them are now able to communicate better as individuals and more willing to work collectively to achieve better results for their community.”

The high-quality organic bananas shipped by Daabon may well still be just bananas to FPJ readers, but sometimes, the back story is just as important as the price.