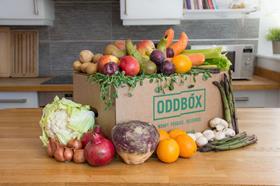 Oddbox is available to homes and offices in London

A box scheme that delivers wonky fruit and veg to homes and offices across London is set to expand further across the capital and to other cities.

Oddbox is currently available to south London homes with a fruit and veg box, and central London offices with fruit, using out of spec produce from the likes of Citrus First, Mid Kent Growers and Walmestone Growers.

The company has also been the sole supplier to The Economist’s free smoothies campaign for the last two years.

“Over the next six months to a year, we’ll look to expand to cover the rest of London. Beyond two years, we aim to expand to Bristol and other cities, dependant on availability of suppliers and funding,” said co-founder Deepak Ravindran.

Oddbox operates from a warehouse in Brockley, south east London, where it collects and redistributes produce from its 15 suppliers based in Kent, Lee Valley and Suffolk.

“Adding at least two new suppliers every month, we are able to meet our growing demand of produce to supply our customers,” Ravindran added.

“When we speak to growers, it’s not just the shape but also other aspects like size, colour, skin blemishes (hail marks or branch rub marks, for example) or if they are surplus to requirements, which contribute to produce being rejected by supermarkets and/or are unable to be sold by local growers, and this is what we focus on. Hence why we tend to call it ‘odd’ box rather than wonky box.”