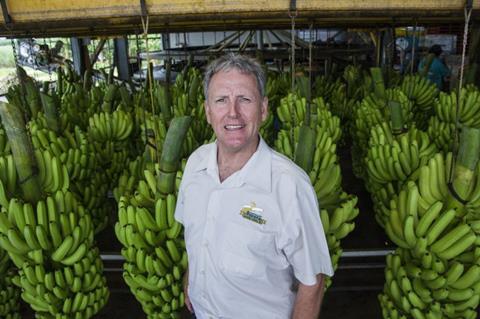 ABGC chair Stephen Lowe said Pekin will leave the organisation in November 2022 after 11 years in the role.

“Jim has been advocating for those who grow Australia’s favourite fruit for more than a decade,” said Lowe.

“He was appointed in the role in the wake of Cyclone Yasi in 2011 and has worked tirelessly on behalf of commercial banana growers since. I’ve seen first-hand the amount of time, passion and effort he has put into this industry behind the scenes.”

Lowe said Pekin had successfully represented the industry – through strategy and advocacy – on all banana industry issues for a decade.

“He will leave behind a remarkable legacy, particularly his key role in the management of TR4 in Queensland and the eradication of Banana Freckle in the Northern Territory,” said Lowe.

“He assisted the ABGC’s board in the purchase of the first TR4 infested property in Queensland, to effectively contain and manage the spread of the disease.

“He then assisted in the development and implementation of an effective government-funded TR4 biosecurity program, that has helped protect industry from rapid spread of the disease since it was first detected in the Tully Valley in 2015,” Lowe added.

“Jim has consistently advocated for better outcomes for growers and has helped move towards a stronger, more sustainable future.”

Pekin said it had been a privilege to get to know, learn from and work with board members and other banana growers.

“Australian banana growers are world leaders at what they do, and I thank them for being so generous with their time, knowledge and friendliness,” said Pekin.

“When I retire in November I will miss the banana industry, which I am very passionate about. It is such an incredibly vibrant industry. I will also miss the great staff that ABGC has and others that I have chewed over banana issues with!”

Pekin’s career has spanned more than 40 years in agricultural industry development, both in the private and government sectors. In addition to his time at the ABGC, Pekin has held senior roles with the Queensland Department of Primary Industries, Victorian Farmers Federation and the Rice Growers’ Association of Australia.

The ABGC will being its search for someone to fill the role immediately to ensure time for a new chief executive to hit the ground running, with the support of the board, Pekin and other senior staff.

Pekin will continue to run ABGC for the next six months to provide oversight and assistance on the range of industry development projects and services that ABGC delivers for industry.