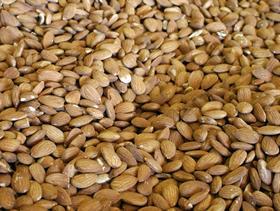 Chief executive of Almond Board Australia, Ross Skinner, said the projected 10 per cent increase in harvest this year was due to the second wave of expansion from plantings in 2016.

'[The record harvest] is mainly based on the increased planting coming into production,' Skinner said.

'We've increased our planting over the past five years, and those trees are starting to mature into much larger trees and bearing much more crop.'

With the harvest due to start imminently, Skinner said the mechanical process of producing almonds, as well as the demand for the product at home and overseas, had meant the industry had avoided major hurdles that were currently facing other horticultural industry from Covid-19 movement restrictions.

The fallout with China that resulted in heavy tariffs on barley and wine is not something that is expected to be a concern for almonds.

'Much of the 2020 crop was pre-sold before the issue with trade relations with China emerged so we were confident that those contracts would be honoured and that has been the case,' Skinner told the ABC.

'All indicators show that the relationship will remain strong, and we have been fortunate that we have alternate markets if things turn sour, but at this stage, things look promising.'

As for labour shortages putting stress on industries like stone fruit, where the strain is causing some farmers to walk away altogether, the mechanics of almond process means less reliance on hands-on labour.

'We will have an extra 1,000 seasonal workers during the harvest season, and most of our producers had organised that labour already,' explained Skinner.

'Being a highly mechanised industry means our harvest requirements aren't as high as the other horticultural industry, so we are well placed when it comes to labour.'

Sales to the second biggest market, India, have increased to 38 per cent compared to last year and the Middle East and European markets are up 16 and 17 per cent, respectively.

'There's been strong growth in the export market, which is what we've needed because we've been growing more and more,' noted Skinner.