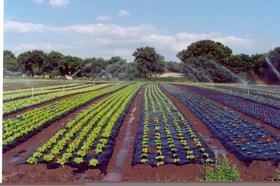 “BioBags are designed to divert valuable organic waste from landfill so it can be used to produce high quality compost to nourish Australian soil,” said Morton.

“Now that we can produce BioAgri mulch film in Adelaide for Australian farmers and provide compostable packaging for growers, the loop is complete because that compost goes back to farmers and greatly increases their yield.”

Morton said BioAgri was an effective solution to the problems that farmers have using plastic mulch film to protect high value crops.

“If a small farmer uses 50km of plastic film in a 12-week growing season, that would equate to a semi-trailer worth of scrap plastic that’s too contaminated to recycle and too expensive to transport to a recycler,” he noted.

BioAgri film is certified compostable and is able to be ploughed into the soil at the end of a crop growing cycle. The advantages of using the film include increased soil temperatures, faster germination and cultivation cycles, long-term nutritious soil and reduced water consumption.

'BioAgri eliminates or reduces the need for herbicides and pesticides by suppressing weeds and keeping fertilisers and nutrients closer to plants,” added Morton.

“It also prevents fruits and vegetables from coming into direct contact with the soil and keeps moisture and heat in the soil so crops grow faster.”