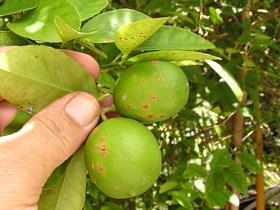 Australia may soon be declared free of citrus canker, as the Northern Territory gets closer to eradicating the deadly disease, nearly two years to the date of its initial detection.

The Northern Territory government has officially lifted the citrus canker restrictions that were in place in Darwin, Palmerston and other rural areas.

Restricted areas are a 600-metre zone around each of the infected premises, where citrus or other citrus canker host plants cannot be moved, grown or kept.

Since 2018, 13 restricted areas were declared following detection of infected citrus plants at 16 premises throughout the Darwin and Katherine region.

Quarantine restrictions on the Katherine restricted area were lifted in November 2019.

In the Darwin region, plant health inspectors have removed citrus canker host plants and materials with the consent of the property owners.

The Department of Primary Industry and Resources (DPIR) chief plant health officer, Anne Walters, said she was pleased with the progress and thanked the community of Darwin for their support.

“Without the support of the community in self-reporting and supporting our plant health inspectors visiting their properties, it would have been very difficult to move towards proving the Territory is free from citrus canker,” said Walters.

Walters explained a designated minimum of six months without citrus canker host plants, known as the host free period, and no record of citrus canker disease during regrowth surveillance activities, was required for the restricted area to be lifted.

Some control areas in Darwin and Katherine remain in place to ensure citrus canker host plants or materials remain contained.

Walters stressed growers needed to continue to adhere to the advice of biosecurity officials, even as the finish line draws closer.

“Maintaining good biosecurity practices is paramount and we ask the public not to move or share citrus plants unnecessarily during the final proof of freedom phase of the programme,” said Walters.

The Territory-led national response programme will now turn its attention to establishing the required evidence to prove that the Territory is free from citrus canker by the end of 2020.

If successful, this will allow Australia to declare the country free from citrus canker.