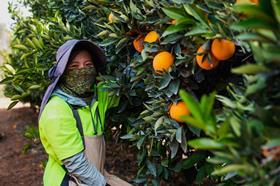 Australia’s horticulture industry is staring down the prospect of a difficult summer harvest, with new research conducted by consultancy firm Ernst & Young revealing the sector could be short by up to 26,000 workers.

International and state border restrictions, put in place to curb the spread of Covid-19, have significantly reduced the number of workers available.

The upcoming shortage of workers will impact Australian consumers, according to the Australian Fresh Produce Alliance (AFPA), which said prices will likely increase and there will be less fruit and vegetables available in supermarkets.

AFPA has previously welcomed the restart of the Seasonal Worker Programme, allowing workers from the Pacific to come to Australia and help to pick fruit and vegetables.

But in a release, AFPA said no new workers had arrived in Australia, leaving many growers without a workforce to harvest their crop.

“We have been working with relevant state and territory governments, as well as federal departments to assist in restarting this programme, but still, no new workers have arrived in Australia and in most states we’re at least 6-10 weeks away from that even looking likely,” said AFPA chief executive, Michael Rogers.

Across Australia, state governments are running campaigns to attract locals into the harvest workforce. However, AFPA said despite the money spent – including A$3m by Western Australia, A$17m in Victoria, A$1.9m in Tasmania and A$1.1m in Queensland – few workers had signed up.

Growers in Western Australia and Queensland are reportedly destroying or are in the process of destroying crops due to a lack of harvest workers, said Rogers.

“This week a citrus grower in Queensland is bulldozing hectares of citrus because he is not confident of there being labour available now, into 2021 and beyond. That’s a decision that is worth hundreds of thousands of dollars and several full-time jobs for Australians,” he explained.

In terms of the long-term impact for Australia’s horticulture industry, Rogers said the uncertainty in workforce would likely see production shrink.

“It is likely growers will reduce plantings and planned harvests because of fewer workers. We can’t be any clearer, there will be less fruit and vegetables available in the supermarket and there will be higher prices if we cannot start addressing the shortfall in workforce,” said Rogers.

The industry is calling for Queensland, New South Wales, Victoria and Tasmania state governments to immediately prioritise the arrival of Seasonal Workers from the Pacific to ensure Australian families have access to fresh fruit and vegetables.

Meanwhile, the Federal Government recently announced new measures to address the labour shortage. These include the option for backpackers already in the country to extend their visas, and allowing Australians receiving JobSeeker to earn A$300 each fortnight while working regionally without losing any of their payments.

Richard Shannon, manager of policy and advocacy at Growcom, said the new announcements are a start, but more needs to be done.

'The Federal Agriculture Minister David Littleproud has said they'll throw the kitchen sink at this problem. We take him at his word. But without any greater intervention the concern of industry is they've only thrown in the tea towel,' said Shannon.

'Extending visas for backpackers already in the country is the very least we can do.

“Where we are today was entirely predictable three months ago or more. Where we'll be mid next year is also plain to see. The shortage is already on us and it will get worse. We can't afford any time for tinkering, testing and trialling,” he added.

Shannon also noted that time is not on the Government's side when it comes to seeing if incentives work, urging an all-in approach as opposed to one characterised by caution.

'We don't know what's going to work. The smarter approach would be to be far more generous with incentives up front, leaving room to dial them back should we get an overwhelming response,” said Shannon.

'This is not a narrow industry issue either. This is a matter of food security, then national security. There are also likely public health impacts,” he concluded.