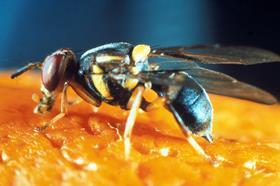 A 15km suspension area and a 1.5km outbreak area have been established around the detection point at both sites.

Nathan Rhodes, executive director of biosecurity at the Department of Primary Industries and Regions, said the Department has immediately commenced an eradication program to eliminate fruit flies from the outbreak area and nearby surrounds.

“Following last week's Queensland fruit fly detection at Renmark West, all available resources are being targeted into both the Monash and Renmark West outbreak areas along with the continuing response to the Mediterranean fruit fly outbreak in Metropolitan Adelaide,' Rhodes said.

'We are working to ensure the eradication of fruit flies from all areas in order to protect our A$1.3bn fruit fly vulnerable horticulture industry. Department staff are in the Riverland now applying organic bait and removing fruit and vegetables from properties in the affected area.'