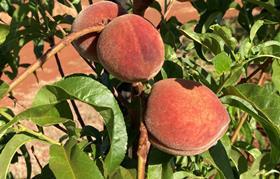 A crop of stonefruit has been successfully harvested in the eastern Pilbara as part of a proof-of-concept trial by Western Australia's Department of Primary Industries and Regional Development (DPIRD).

Although the Pilbara is renowned for its extreme heat, elevated inland areas of the region often achieve the near-freezing overnight temperatures in winter required to produce stonefruit.

The 0.2ha irrigated trial was established at Martu Farm near Newman in November 2018 with 40 trees, comprising a mix of low chill peach and nectarine varieties.

The trial was undertaken as part of the department’s Transforming Agriculture in the Pilbara (TAP) project, to explore the potential for irrigated horticulture, fodder and field crop production in the region.

“While this was a proof-of-concept trial and more agronomic and economic analysis is required, the trial results show that low chill stone fruit can be successfully produced under irrigation in the eastern Pilbara,” Schelfhout said.

“Although the trees are still young some varieties were laden with fruit. There were no significant pests or diseases and the eating quality of the fruit was very good.”

The trees were irrigated using a micro-sprinkler system, which encouraged grass to grow in the inter-row area to provide a cooling effect over the summer months.

Schelfhout said if further investigation proved stonefruit production was viable in the eastern Pilbara, it could provide a new crop option for pastoralists and local Aboriginal businesses.

“With harvest in October and potentially even September, there could be a good early season market opportunity for Pilbara stonefruit production to displace imports,” Schelfhout said.

“Potentially, stonefruit could provide another diversification option for Pilbara landholders or create a whole new opportunity for entrepreneurs.”

The trial is one of the many outcomes of the TAP project over the past three years, which has worked with industry partners on several irrigated systems research initiatives.

The project has also examined the potential and challenges associated with using mine dewater for irrigated agriculture. A final report on the findings from the project will be produced at its conclusion in 2022.