Ripe Robotics are making progress in its bid to develop a robot capable of harvesting commercial volumes of fresh fruit.

The Australian company is hopeful of beginning orchard trials with the fifth iteration of its robotic solution this season.

“We’ve changed the end-effector, previously we had big tubes which worked well on a small scale, when we were picking apples of up to a couple of hundred, there was no problem. But a stick might become lodged very couple of hundred, which is still far too often. A stick every 10,000 apples is still too frequent.

“So we’ve made some changes, still using suctions but using a smaller suction cap that wraps around the fruit, and it’s looking to be a lot more effective.

“We’re still hoping to get it into orchard late this season, there’s obviously only Pink Lady apples still to be picked but we’re still aiming to get it out for testing, and then oranges after that and look to expand throughout next season.”

Jay said the robot is still several years away from being commercially available, but his company – based in Victoria’s Goulburn Valley – already has buyers lined up for the first edition. 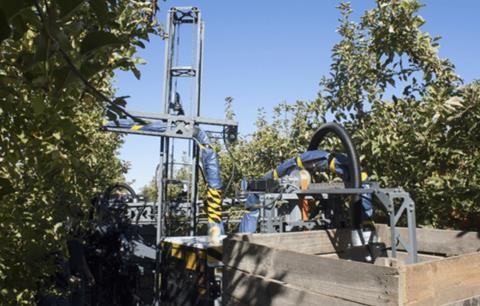