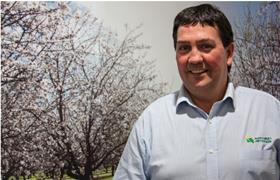 The long-serving chief executive of the Almond Board of Australia (ABA), Ross Skinner, has announced he will step away from the role after 11 years.

Announced in Australia's almondy industry magazine, ‘In A Nutshell’, Skinner’s career began in economics and accounting before moving into the world of agriculture. He took up the position of project officer with the Australian Dried Fruits Association (ADFA) in the 1980s.

He then joined Horticulture Australia to manage the statutory research and marketing levy programmes for many of the major horticulture industries in the Southern Basin, including almonds.

After some coaxing by the then ABA chair, Brendan Sidhu, Skinner decided to take up the chief executive role in 2010 to focus on one industry’s development and one that he believed had enormous potential.

Skinner said the almond industry has come a long way during the past decade. “When I joined the ABA, the industry’s first planting boom had subsided with plantings plateauing at around 27,000ha, but many orchards were still maturing, and the production was setting records year on year from 39,000 tonnes in 2010 to now 124,000 tonnes.

“A second planting boom commenced in 2016 that has seen the orchard area develop to 60,000ha including plantings this past winter.

“This will continue to drive production increases well into this decade along with ever improving yields per hectare that our growers are achieving,” he said.

Skinner also paid tribute to the growth of the ABA. “As the production base has grown, the ABA’s programmes have grown in the areas of market access and development, identification and extension of best practices, biosecurity, food safety, sustainable production systems, along with efforts to achieve input surety for water, bees, chemicals, labour and quality planting material,” he said.

“These are all elements of the industry’s strategic plan, the implementation of which has become better resourced with funding and skilled staff as revenue from levies, grant funding and commercial activities have increased.”

Skinner noted the strengthening of ABA’s relationship with the Almond Board of California as a key development during his period at the helm.

“This has led to a free exchange of research and knowledge between our organisations based on our perspective on great respect for their efforts across many areas that advance the global almond industry,” he said.

According to Skinner, there are many reasons the almond industry is going from strength to strength. “We have a wonderful product, suited to mechanised production systems, with few pest or disease issues compared to many other industries, and few phytosanitary issues in accessing export markets,” he said.

“Almonds enjoy strong demand growth due to their health benefits, versatility of use, durability, and cultural acceptance in countries with burgeoning economies.

“An important element in the success of the Australian industry is the enormous skill and effort that industry members, from producers and their staff to those working to process and market our almonds, bring to their businesses and jobs.

“All of the above underpins an industry that is both viable and sustainable in a relatively stable operating environment,” Skinner concluded.