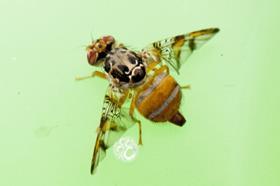 A recent outbreak of Mediterranean fruit fly was declared at Marleston on 2 March, with immediate on-ground biosecurity response measures put in place.

This outbreak covers 15 suburbs in Adelaide's west, and is the tenth outbreak of Mediterranean fruit fly in metropolitan Adelaide since the beginning of the year. There are a further four cases of Queensland fruit fly ongoing, with one declared in the northern suburb of Ridleyton, and a further three in Renmark, a key citrus, grape and stonefruit production region in the state's mid-north.

'With currently ten Mediterranean fruit fly outbreaks and one Queensland fruit fly outbreak in metropolitan Adelaide, I implore every resident living within the outbreak area to do the right thing and support our battle against this pest,' Rhodes explained.

'These restrictions are an essential tactic, in combination with the work of our field teams, to protect South Australia's A$1.3bn horticulture industry at risk from fruit fly and the tens of thousands of jobs it represents.

'By this stage of the year the fruit fly life cycle traditionally slows down significantly for the insect's ‘over-wintering' period, and this presents us with an opportunity to make greater inroads with our eradication programme.”

Residents in or near the Marleston outbreak are being encouraged to remove any fruit from backyard trees in order to stop flies reproducing.