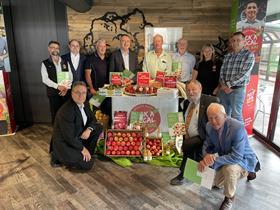 The Horticulture Coalition of South Australia (HCSA) has revealed a new plan to grow the value of the state’s fresh produce industry to A$5bn by 2030.

The industry currently employs 13,500 people and contributes A$3.5bn to the state’s economy and HCSA’s 2030 Blueprint outlines the path to adding thousands of new jobs and reaching the ambitious goal.

HCSA is made up of 12 organisations that represent the more than 3,000 fruit, vegetable and nut growers across the state.

HCSA chairman Angelo Demasi said this was a crucial time for the industry that not only feeds South Australians but exported A$374m worth of produce in the 2019/20 financial year.

“We have set a lofty goal of A$5bn by 2030 and we believe a collaborative effort between growers, state government and the South Australian community can achieve this,” said Demasi.

“Despite devastating bushfires and crippling hailstorms, including the weather event last week, the horticulture industry has managed to grow an average of 5 per cent per annum in the past six years.

The pathway to A$5bn is not without challenges but Demasi said the industry was committed to overcoming them. The state’s recent fruit fly outbreak is one challenge that has taken a toll.

“This requires a continued commitment to eradication programs as well as every South Australian with fruit trees in their backyard to be vigilant. Together we can win the war against fruit fly,” Demasi said.

Labour is another prominent challenge and Demasi said continued investment in programmes such as the state government’s A$5m labour workforce programme would support progress and bring in the next generation.

“There aren’t enough workers in regional areas and we need to look at how we can attract people from the city as well as continue to use migrant workers,” said Demasi.

“There are so many exciting and varied career pathways available to young people who want to work in horticulture. We estimate this will continue to grow with an additional 3,000 full-time jobs created by 2030,” said Demasi.