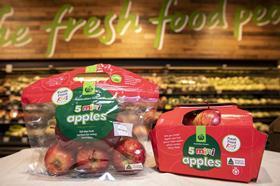 Australian retailer Woolworths’ efforts to increase suitability across the company have now extended to its children’s fresh fruit range.

The company has commenced a trial where it will switch plastic packaging in its popular Fresh Food Kids range of apples, pears and bananas to easy-to-recycle cardboard boxes.

This move comes in addition to a wide range of initiatives Woolworths has already implemented across its fresh produce range aimed at reducing the use of plastic.

By moving out of plastic clamshell and into adhesive tape for bananas, replacing rigid plastic trays with pulp fibre on tomatoes, moving to a paper tag on broccolini and reducing plastic film by 30 per cent in weight on carrots and potatoes, Woolworths has removed a further 237 tonnes of plastic packaging in the last year.

The tray Woolworths uses for its sweet potatoes and organic apples is now made of recycled cardboard, rather than plastic.

“Something that was very surprising during Covid-19 was the continued relevance of the environment, with 70 per cent of Australians saying that taking care of the planet and making sustainable choices remained important to them, even at the height of the crisis,” Banducci said.

“This is something that we’re equally passionate about and Woolworths remains as committed as ever to creating a greener future,” he added.

“While we’ve made pleasing progress in reducing the amount of plastic in our stores, supported recycling labelling initiatives, and made improvements in energy efficiency, sustainable sourcing and reducing food waste, we know there is still much more to be done to meet our customers and our own aspirations.”