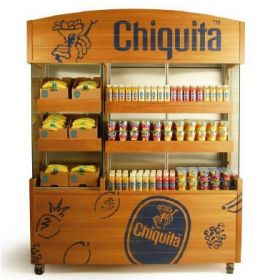 US fresh produce giant Chiquita Brands International says higher prices and the ongoing restructuring of its business, including the recent sale of German distributor Atlanta to Belgian group Univeg, is putting the company on course for better full-year turnover and net profit in 2008 compared with last year's results.

In a statement to the New York Stock Exchange, the company posted a 6 per cent rise in second-quarter net sales to US$1bn, compared with US$5bn during the same period of 2007. The company said it expected to achieve "significantly better operating results" for the full year. "We remain focused on aggressively improving profitability, and prudently investing in the launch of innovative products to become the global leader in healthy, fresh foods," said Fernando Aguirre, said Chiquita's chairman and chief executive officer.

In terms of sales volume, Chiquita achieved the strongest growth in its Asian and Middle East markets, where it sold 6.1m 40lb boxes, 35.6 per cent more than in the second quarter of 2007. In its European core markets, sales volume was down 8 per cent to 12.7m boxes, while volumes sold in North America were largely unchanged at 16.1m boxes. Trading markets saw a 46.2 per cent year-on-year downturn in sales for the quarter to 1.4m boxes.

According to the statement, the company said that it had continued to focus on tackling cost increases and boosting profitability. "The company continues to expect it will generate significant improvement in sales and operating income from continuing operations for the full-year 2008, compared to the full-year 2007," it said. "This is primarily due to contract and market price increases and the benefits of the company's restructuring, which are more than offsetting increases in industry and other product supply costs."

Including the results of its discontinued operations, the company reported income of US$62.1m for the second quarter of 2008, compared with US$8.6m in Q2 2007. This included other income, net of tax, of US$6m from the resolution of a claim related to a non-income tax refund. The second quarter of 2007 had also included a charge of US$3m related to the settlement of US antitrust litigation.

"I am very pleased with our strong second quarter results, which mark our best quarterly performance in three years," said Mr Aguirre. "Our ability to deliver year-on-year improvements, despite unprecedented cost increases, is a testament to the strength of our business, the diversity of our product portfolio and our strategy to drive profitable growth. We are particularly satisfied that our pricing discipline and focus on profitability has improved the performance and momentum of our banana segment for the fourth consecutive quarter."

However, Mr Aguirre admitted that profitability at the group's salads and healthy snacks business during the second quarter had been disappointing. The company posted an operating loss of US$6m, compared with operating income of US$10m in the year-earlier period. "We are disappointed with the current performance of our salad operations and we are focused on executing plans to improve our salad margins over time," he confirmed.

"The transaction will enable the company to increase its focus on providing branded, healthy, fresh foods to consumers worldwide, while ensuring continued reliable, high-quality ripening and distribution services of Chiquita bananas in the German, Austrian and Danish markets," it said. The sale is expected to be completed during the third quarter, after the completion of a normal review by EU competition authorities.

"Atlanta AG's commodity distribution business was no longer a strong fit with Chiquita's long-term strategy to drive profitable growth," the company confirmed. "Although Atlanta AG represented US$1.2bn in revenues from non-Chiquita products in 2007, its results have not been significant to Chiquita's annual operating income in recent periods. Chiquita anticipates that the sale and related entry into a long-term banana ripening and distribution services agreement with Univeg will result in a gain as well as a one-time tax benefit."

The company's estimates for higher industry and other product supply costs remains the same as provided in the company's mid-quarter update in June, it said. As previously announced, the company said it continued to expect the balance of 2008 to follow normal seasonal trends, including "a loss in the third quarter roughly in line with the loss incurred in the third quarter of 2007".