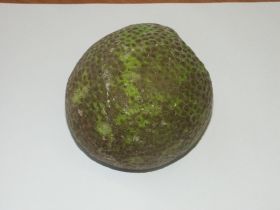 Scientists have found that a fruit hailed by some as a possible solution to world hunger could play a totally different role in saving lives.

The Agricultural Research Service (ARS) in the USA has found that breadfruit flowers contain three chemicals which excel at repelling flying insects, including mosquitoes.

In Hawaii and other regions, people have known for years that burning dried clusters of the flowers, known as 'male inflorescences', can keep bugs at bay, and the ARS scientists say they have identified the three key chemicals involved in this repellency - capric acid, undecanoic acid and lauric acid, also known as C10, C11 and C12 saturated fatty acids.

To prove the potency of these natural chemicals, male inflorescences from a diverse selection of breadfruit trees were sun-dried at the National Tropical Botanical Garden’s Breadfruit Collection in Kalaheo, Hawaii, and given to the ARS scientists for testing.

The scientists collected smoke samples as they burned the inflorescences in the traditional method used in Pacific regions.  They identified more than 30 compounds in the smoke, including fatty acids and aromatics.

The compounds’ effectiveness was tested at an ARS laboratory in Maryland against adult Aedes aegypti female mosquitoes, using a blood-feeding membrane system that mosquitoes feast upon as if it were a human.

The breadfruit compounds came through with "flying colours", proving to be significantly more effective at repelling mosquitoes than DEET, the primary insecticide used against biting insects.

In Caribbean countries where breadfruit flowers are available, they could offer a low-cost alternative for people who can’t afford expensive repellent products.