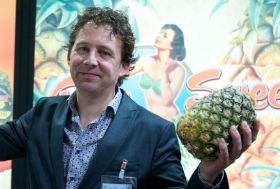 So why haven’t the crowns slipped already? “We are the first company that I’ve seen try to bring this to market,” Vermeulen says. “But the industry isn’t going to change overnight and it will take several years for a substantial part of the market to switch."

He adds: "Ultimately, it will be growers that call the shots because it all depends on logistics cost. Everyone’s been talking about crownless pineapples, but we’ve taken the step of actually marketing them to consumers.”

Nic Jooste, who developed the Let’s Go Topless campaign, feels the move adds plenty of value. “Shipping crownless pineapples has a significant effect on our CO2 footprint and removes a notorious breeding place for fungi," he says.

"But the challenge is not to identify advantages, rather to convince the consumer. Hence our ‘in your face’ campaign, which is meant to start a public discussion around crownless being eco-friendly.”